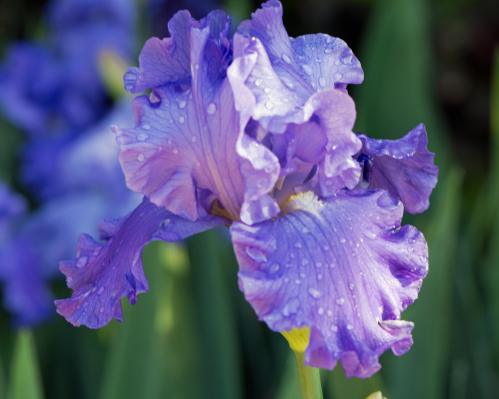 As usually happens when I travel, I picked up about three pounds, which I’d very much like to drop. Three isn’t a lot, but it can so easily become six, or twelve. And it’s so much easier to add than to subtract! With reducing in view, I’ve been focussing my exercise recently on fat burning, adding 15 minutes to my usual 30 of morning cardio, along with the usual resistance, core, and stretching. I’ve been doing various combinations of machines (elliptical, stairs, rowing, treadmill), classes (spinning, yoga), and outdoor running. On Saturday morning, I considered spinning at Flywheel or yoga at Blue Lotus, and decided to go to O2 for an aerobic martial arts-type class.

But first I went up to Raulston Arboretum, getting there a few minutes after 8:00 a.m. The big story this week was irises of various colors, boldly blooming, and still dewy when I got there. I spent an hour strolling and trying to capture their spirit, and then headed to the gym.

The exercise class was called Body Attack, and involved an hour of rhythmic footwork, punching, and kicking, to a throbbing club-type beat. I’m a highly non-violent person in real life, but I must admit, shadow boxing with a group is fun. I succeeded in sweating a lot and getting my heart rate into the mid-150s, and avoided either accidentally kicking or being kicked. 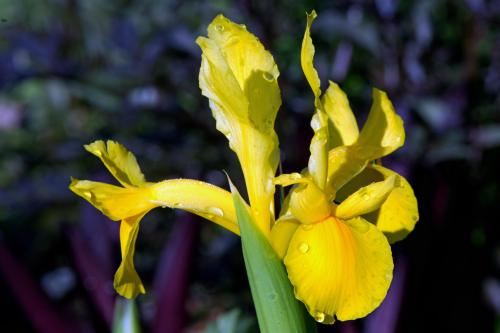 After showering back home, I drove out to Cary for a haircut with Ann S, my hair cutter of many years. I always enjoy talking with Ann about our families and doings. Part of her news this time was sad: their 14-year-old dog had to be put to sleep this week. The diagnosis was liver failure. I mentioned that I’d been thinking of our sweet Stuart’s mortality (as I noted last week), and we both struggled to articulate what is lost when a beloved pet goes.

On the way back to Raleigh, I stopped at Swift Creek Bluffs for a walk in the woods. It was muddy from recent rains, and most of the wildflowers were gone, but things were green and lively. The creek was burbling, and a wood thrush sang brilliantly. I ran into Matt J., a fellow photographer who knows a ton about wildflowers, and we talked about plants and cameras. I saw this little guy:

On the drive back, I made a stop at the Washaroo to get Clara a shower, and listened to NPR reports on the protest violence in Baltimore. I was not aware, since I almost never watch TV news, that the right-wing media had been demonizing the protests. That’s crazy! I think I have a pretty good idea why Baltimore’s poor blacks (like those in Ferguson and many other cities) were angry. I learned a lot from Alice Goffman’s excellent book, On the Run, which vividly lays out what it means to live in a city (in her case, Philadelphia) where the police take the view that you are either a criminal or potential criminal and constantly harass and intimidate you.

It’s a harsh reality. It is unusual to be able to have a normal job, a loving family, and a comfortable place to live, and usual to face violence from both police and gangs, poverty, and betrayal. A legal system organized around criminalizing recreational drugs and draconian punishment for violators is a basic part of the problem, but there are other layers, including police militarization and racism. The people who are the victims of this system mostly suffer in silence, and so middle class America is mostly oblivious to the depth of the problem.

But that may be changing. When people destroy their own neighborhoods, it’s a wake up call – we at least know something is very wrong, and maybe we wonder what it is. I was cheered this week to read a news story that the leading presidential candidates on both sides agree that the system of mass incarceration for minor crimes needs to be turned around. Can our political system fix this humanitarian disaster? Repealing overly harsh sentencing laws and ending the war on drugs would be a good start.

In the afternoon, I read some and practiced the piano. At the moment, I’ve got on the workbench polishing and memorizing Chopin’s Preludes in C and G, Schubert’s G-flat Impromptu, Schumann’s Arabesque, Debussy’s Reverie, and Liszt’s Liebestraum No. 1, while working on my first music by Arnold Schoenberg – his Six Little Piano Pieces. Schoenberg wrote this in 1911 and uses his famous twelve-tone system, which systematically avoids traditional harmony. It’s highly angular music, and not easy to love, but seems much more approachable to me now. I’m finding strangely haunting melodies, and a sensuality not so far from Debussy’s.

On Saturday evening we went to see the Carolina Railhawks play Tampa Bay at the soccer park in Cary. We enjoy our soccer outings, but figuring out a food option has been challenging. There is no healthy vegetarian food on sale, and our system of smuggling in a sandwich went down last season when they began checking in bags at the gate (and we had to consume our Jimmy John’s veggie special standing in the parking lot). Sally had read a review of a new southern Indian vegetarian restaurant on Chatham Street just past the soccer park, and we tried it out before the game. At Sri Meenakshi Bhavan, the chaats were delicious, and there was a great selection of dosas. The décor was purely functional, and there was no alcohol, but the price for this marvelous food ($35 for two) was most definitely right.

At the game, it was a bit chilly, and we were glad we’d brought our sweaters. There were some exciting sequences, but I left displeased with the Railhawks’ sloppiness. We were fortunate to get away with a 1-1 tie. I’m hoping it was just an off night, and not a step down from the high level of play of last season. I was also displeased with the broadcasting of local advertising by a booming PA system during the course of play. There were several such ads in the second period, which were very annoying. Who thought this was a good idea? I intend to complain.