New construction in our neighborhood, a presidential tipping point, and great piano music in Chapel Hill

Looking north from our parking deck toward the new Publix grocery building at a parking deck under construction. This view disappeared forever later that day when a new section of wall went up.

The start of fall brought a harsh heat wave in central North Carolina, but in the past few days it’s cooled off.  The huge construction project in the two blocks north of our building is moving right along. We’re going to have a new grocery store and other businesses, as well as a lot of new apartments.

Construction sites are noisy and dusty, and great fun to watch.  I love the big machines, like cranes, bulldozers, and dump trucks, and the heaps of building materials, and the clay at the bottom.  And I love to watch the workers, with gratitude for their tough work through the heat and other hazards. 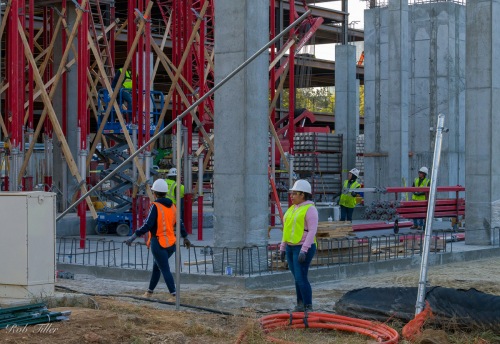 Change is in the air in politics, too.  With criminal investigations closing in on the President, he seems more and more desperate and crazy.  He’s intimidated ordinary, sensible Republican leaders, and it’s far from clear whether they’ll ultimately find the gumption to defend the Constitution and stop him.

It’s possible we’ll end up with a thugocracy along the lines of Russia, China, or Turkey, but dumber. But I’m guardedly optimistic that our democratic traditions will survive, and we may soon be seeing the last of the hair-raising Trump presidency.

Either way, life will go on, at least for some of us, for a while, and we’ll have some exciting new construction and other projects.  One of mine was finishing the book that Kyle DePew, my new son-in-law, gave me last Christmas: Alan Walker’s lengthy new biography of Frederic Chopin (1810-1849).  Chopin’s piano music has been given me great joy for substantially longer than he lived, but I knew little about his life.

Chopin was quite sick with tuberculosis for most of his life, and even as he was hailed as a brilliant pianist and composer, struggled to make a living,  He lived in the midst of wars and revolutions, and his domestic situation was often turbulent. The body of music he bequeathed us is a testimony to his strength and courage, as well as his brilliance.  Walker’s biography is excellent, but long.  With its many musical examples, it will deepen the appreciation of musicians and probably be challenging for those without a musical background. 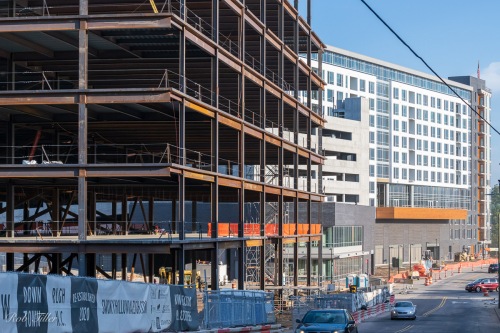 The building which will have the new Publix grocery store looks like it may actually turn out handsome.

A couple of nights ago, Sally and I got to hear one of the truly great pianists of our time, Marc-Andre Hamelin.  Hamelin performed in the Chapel Hill home of Ken Gorfkle on Gorfkle’s top-of-the-line Bosendorfer concert grand before an audience of about 100. His program included works by Scriabin, Prokovfiev, and Samuil Feinberg, and Schubert’s transcendent final sonata in B flat, D. 960.

Hamelin is a multi-faceted artist of the highest rank.  He takes on works of legendary difficulty, and finds the emotional truth within the technical fury.  He discovers and champions more or less unknown works, like Feinberg’s third sonata, and as we learned from one of his encores, is a gifted composer in his own right.

I was overwhelmed by the poetic luminosity and magnitude of his Schubert interpretation. As I mentioned to him as we were leaving, his presentation of the Feinberg earlier in the concert helped me hear the Schubert with new ears.  After his performance, he took questions from the audience, and turned out to be very personable and articulate.  He credited his father as a major early musical influence, with his amateur piano playing and collection of 78 RPMs of great classical pianists.

Ken Gorfkle’s Bosendorfer was an extraordinary instrument, both in its delicacy and its power. The entire experience was really exhilarating.  Kudos to Gorfkle for inviting Hamelin and us into his home and curating this wonderful evening. I’m looking forward to the next concert in his series.

Looking south on Harrington Street toward Casa Tiller, which is on the far side of the building.