Losing things, and joining a protest 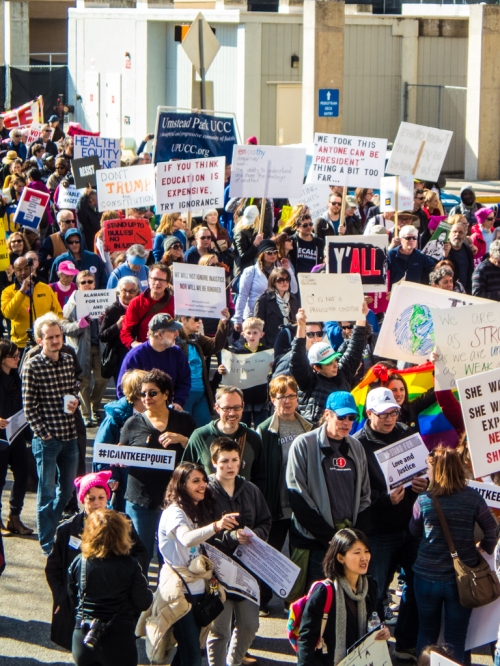 It’s been almost 3 hours since I last lost something, which is a slightly sad thing to be pleased about.  Lately my little things — car keys, access cards, reading glasses, my tablet device, my phone — have gone missing more than usual.  I find them eventually, but the interval between losing and finding is tense and uncomfortable.  It could be early onset Alzheimer’s, but I suspect the cause is Trump.  With his non-stop boasting and lying, his cluelessness on every vital issue, his shameful targeting of minorities,  and his general shamelessness, he’s got me spinning and oscillating with amazement, laughter, and fear.  That could be what’s impairing my brain.

It may be no coincidence that I’m seeing more references to losing things.  I’ve heard multiple citations recently to the famous Elizabeth Bishop poem One Art (“The art of losing isn’t hard to master.”), which is worth rereading.  And there’s a beautiful, lively, and touching piece by Kathryn Schultz in the current New Yorker entitled Losing Streak.   She writes of her personal losses of little things (wallets, bike locks), and big ones (her car, her father).  Schultz comes up with some fun facts: the average person misplaces up to 9 objects per day, and in a lifetime will spend 6 months looking for lost things.  She identifies some of the possible causes — your spouse, aliens, wormholes.

The only disappointment was  that she didn’t zero in on Trump.  But a new piece by David Frum in the Atlantic tends to confirm his potential for making us all losers, wondering what became of our democracy.  Frum points up a critical difference between previous varieties of fascism and Trumpism: Trump doesn’t need to stop holding elections, shut down the press, and murder political opponents to achieve his primary objective:  enriching himself.    Modern kleptocracies grow by fostering cynicism and apathy.  Corruption could become ordinary and expected here, as is already has in many countries.  A possible future is the end of the rule of law.

Frum ends on a hopeful note by encouraging us to all get in touch with our Congressmen and Senators and support good laws.  He seems to be of the view that resistance is not futile.  That’s where I am, too.  Even if it is futile, the alternative is worse.

Apropos, on Saturday morning I went to a protest in downtown Raleigh– the HKonJ and Moral March organized by the NAACP with some 200 other groups.  Fayetteville Street was packed for several blocks with many thousands of people.

Being in big noisy crowds is not comfortable for me, but that said, it was a cheery noise, and a truly diverse crowd.  There were signs for Black Lives Matter, LGBTQ rights, gun control, reproductive rights, immigrant rights, living wages, health care rights, civil rights, and animal rights, among many others.  There were signs against The Wall, the immigration ban, HB2, voter suppression, Tweeting, and intolerance, among many others.  There are so many things that need resisting that it’s hard to stay determined and focused, but we’ve got to get started. 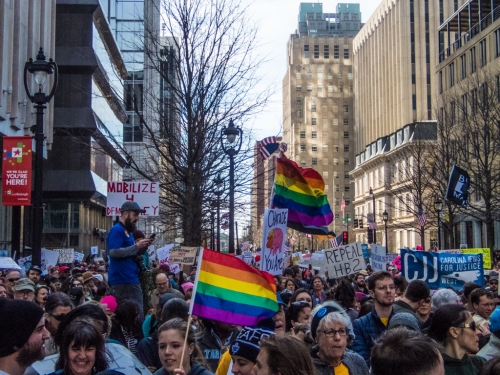