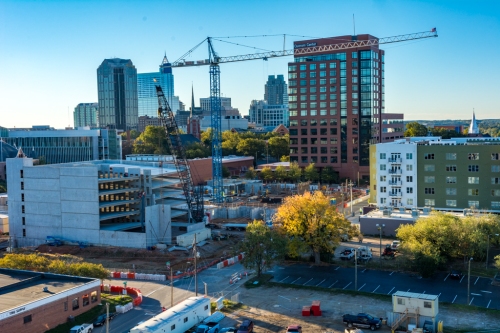 Here are some pictures from the last few days of construction at the old Greyhound bus station site, as viewed from our balcony. After several weeks of grading at the site, things are moving along quickly. These were all taken at sunrise. Every sunrise was a little different.

I did early voting on Monday, when there was no line at all. I liked the convenience, but worried a little that there weren’t more people (i.e. Democrats) queued up. It’s looking now like this is going to be a close finish, and I’ve got some butterflies. 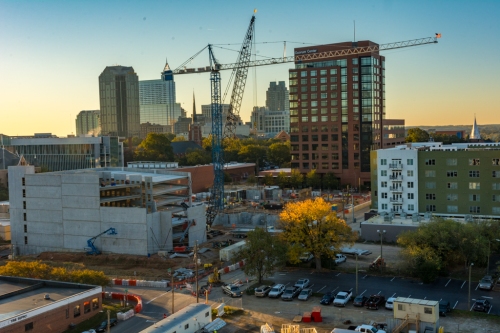 The ballots in North Carolina are like bubble tests, and the instructions warn you to fill in each bubble completely. I very much wanted to do an adequate job, since I wanted that vote to count. It’s not that easy! After experimenting on the first few, I found that the best technique is to start in the middle with a doodle and work out toward the edges of the bubble.

When in doubt and it’s at all possible, I try to look on the bright side of things, as I’ve done in this election season. The Republican candidate has definitely raised the profile of some problematic issues, like racial discrimination, religious discrimination, and abuse of women. True, he seems to be in favor of all those, but his radical ideas, like banning Muslims, illuminate a part of the national id. And boy, did he ever get us talking!

Still, it boggles my mind that a significant number of well-educated, mentally stable, and otherwise decent people are voting for the Orange One. At this late date, it does not seem possible that any person otherwise equipped to fill out a ballot could not have heard about his lifelong record of dishonesty, deceit, and moral turpitude, not to mention his fathomless ignorance.

It’s unsettled some of my assumptions about how people think. That is, I’ve understood that we are not completely rational creatures, and that we’re governed in large part by emotions. But I had not processed that there are no apparent limits on the human ability to withstand reason and evidence. So the Orange One has at least taught us something. That could help explain other hard-to-understand things, like anti-science crusaders and conspiracy theorists.