In New York with my kids, and a Snap Pea dinner in Raleigh

St. Patrick’s Cathedral from the 35th floor of the New York Palace

After the Softer Freedom Law Center conference on Friday, I grabbed a cab and headed downtown. The plan was to meet up with Gabe, Jocelyn, and J’s friend Kyle for Italian food and then some jazz. I allowed an hour for the trip from Columbia (116th St.) to the West Village, but the traffic was epically bad, and the trip took almost two hours.

My cabbie was a compulsive talker, and he really wanted to talk about Trump. Out of desperation for another subject – any subject — I started asking him about himself, and learned about his upbringing in Ecuador, his work as a commercial printer with diminishing opportunities as those jobs moved abroad, and his plans to move to California. I ended up liking him.

Olio e Piu, a fine Italian restaurant on Greenwich Ave., was crowded, but they quickly got us a table. My ravioli al funghi was to die for. Afterwards, we walked over to the legendary Village Vanguard and listened to a quartet led by the pianist Enrico Pieranunzi.

Pieranunzi had the elegant pointillism of Bill Evans joined with the percussive emotionality of McCoy Tyner. His original charts were both engaging and bold, and three bandmates were excellent. I particularly loved drummer Clarence Penn, who was a hard-driving yet subtle polyrhythmist with a huge smile, and tenor Seamus Blake channelled the smoldering intensity of John Coltrane. I couldn’t find any online recordings of this current group, but here’s a sample of Pieranunzi’s playing.

On Saturday afternoon Gabe and I went to the Frick. Since he’s well along in his graphic design program at Parsons, he’s got a high level of visual sophistication, but he hadn’t yet experienced the world class collection of old masters there. It was fun sharing some of my favorite paintings, including the Vermeers and Rembrandts. We had an espresso afterwards, and then he headed downtown to do some studio work, and I walked over to the Met Breuer.

There, I had my second close encounter with the fantastic Diane Arbus exhibit (leaving Nov. 27), and my first with the paintings of Kerry James Marshall. These included some very large-scale works with a lot of painterly quotes, references and influences, with most of the works prominently depicting black people.

Marshall’s art is political in a vital sense: it makes visible previously hidden social forces and assumptions that limit us. Marshall points up that blackness is normal and part of us, but black people have been largely excluded from the paintings in our museums. The implications of this are interesting. His black people as really black – darker than any American with African ancestors that I’ve ever seen. That seemed to be part of his playfulness, but it was also provocative.

A view of St. Pat’s from the hotel gym.

Afer that, I walked over to the main Met to check out the work of Max Beckmann. He’s generally thought of as an Expressionist, though he rejected that label. His best work has the psychological depth and penetration of Picasso. Some of it was dark and macabre, but there were also elements of humor. I liked it. I also spent some time with the pre-Columbian collection and a small current exhibit of Native American work.

That evening, Jocelyn and I ate at Rosa Mexicana on Columbus and 61st, where they made guacamole at the table and served fantastic vegetarian hongo tacos. It was just across the street from Lincoln Center, and so we were confident that we’d get to the opera on time. I was very excited about seeing Rossini’s L’Italiani in Algerie, which I’d prepped for with a recording from Spotify. But it was canceled. New York’s Finest were there in force when we arrived. Apparently there was a scare having to do with a patron throwing some brown substance (possibly human remains) into the orchestra pit.

Jocelyn proposed a Plan B, which was to go to a Jazz at Lincoln Center concert: Vince Giordano and the Nighthawks. We got in to the 9:30 show off the waiting list. The band was some 14 ace musicians who recreated the hot jazz of the 1920s with passion and erudition. Vince G played tuba, string bass, and bass sax, and sang a bit as well. It was delightful, toe-tapping fun! 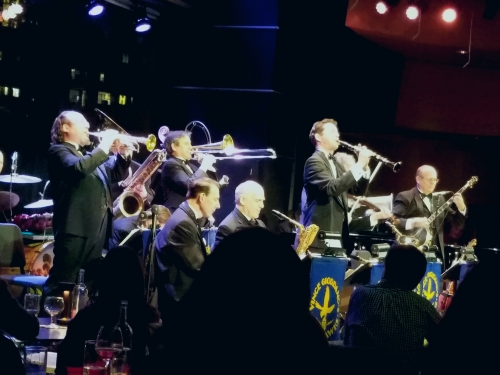 On Sunday, my flight back to Raleigh went smoothly. That evening, we went to our first pop-up dinner by Snap Pea with our friends Gerry and Gay. The Snappea dinners are multi-course vegetarian events held in surprise venues (revealed only hours before) with food created around a theme paired with the physical space.

Jacob Boehm, the owner and executive chef, was inspired by an abstract mural gracing an otherwise vacant shop in North Hills Mall, and used different colors for the 9 courses. As each course came out, he told the group about where the ingredients came from and what he’d done with them. He helped you taste more. I especially liked the spoonbread with turmeric butter and the chestnut soup. Jacob explained that the reason he did not use meat in these dinners was for him not premised on animals rights or health, but rather because using plants inspired more interesting experimental cooking and tasting.