A lovely wedding, and new books on evictions and the war on drugs 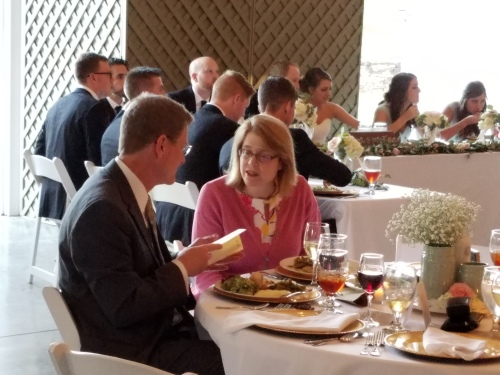 On Saturday we drove down to Charlotte and then flew to Chattanooga for my nephew’s wedding. After we checked in to the downtown Holiday Inn, we took a cab to Dalton, Georgia for the ceremony.  The venue was a converted farm, with green meadows and mountains in the distance, and the skies were sunny and blue.  It was good to see family, and good to see the loving groom and bride.

On Sunday morning we walked from the hotel down to the river, and that was all the time we had to check out Chattanooga before flying out.  We would have visited the aquarium if we’d had a little more time.  People we encountered seemed unusually friendly.

With the benefit of all that happiness, I was able to have a look at some counterbalancing sad truths, including finishing reading Evicted, by Matthew Desmond.  It’s a close up view of the lives of poor people in Milwaukee who can sometimes barely, and sometimes can’t, make rent.  The problems related to housing insecurity are basic but also big — joblessness, poor nutrition, poor education, and lack of community.  It’s an eye- opening  and disturbing portrait, and a call for reform. I highly recommend it.

I also finished a Chasing the Scream, by Johann Hari, a book about our war on drugs.  The book focuses on a few individuals who were either drug warriors (government officials, drug logs) or victims. I hadn’t known the story of Harry Anslinger, a primary architect of the federalization and internationalizing of the war on drugs starting in the 1930s. In this telling, he is a ignorant, peculiar man, but, unfortunately, highly effective in promoting the idea that some drugs are inherently evil, and the people who take them should be treated as criminals.

Hari offers the alternative view that illegal drugs are not inherently different from legal ones, and although they can be harmful, we’ve inherited a greatly exaggerated view of their harmfulness.  Drug addicts are not zombie monsters, but rather troubled human beings who can be helped.  He examines the results of the legalization programs in Portugal and elsewhere, and looks at how we might get to legalization in the U.S.  I thought the book was a bit heavy on the human interest anecdotes and sometimes light on the science, but still well worth reading.

There was also a good short primer this week on the history of the war on drugs in the Huffington Post by Tessie Castillo. Castillo makes a good case that the main reason we treat certain drugs as illegal was economics and cultural prejudice, and particularly fear of immigrants.  Opium was perfectly legal and widely available until Chinese workers were demonized as taking American jobs, at which point it was criminalized.  Similarly, marijuana was legal until it became associated with Mexican immigrants and other minorities, at which point it became “dangerous.”  The myths required to sustain this view, including explicitly racist nonsense, eventually began to seem real.

Richard Nixon has been treated unfairly by history in some respects, such as our tendency to forget his progressive social programs, but he deserves disdain and disgust for his whipping up the hysteria on drugs.  According to reporting by Dan Baum, John Ehrlichman, White House counsel to President Nixon, fessed up as follows: “The Nixon campaign in 1968 and the Nixon White House after that had two enemies: the antiwar Left and black people… We knew we couldn’t make it illegal to be either against the war or black. But by getting the public to associate hippies with marijuana and blacks with heroin, and then criminalizing both heavily, we could disrupt those communities. We could arrest their leaders, raid their homes, break up their meetings, and vilify them night after night on the evening news. Did we know we were lying about the drugs? Of course we did.”

Political cynicism? Perhaps a wee bit. But note, President Reagan followed suit, and President Clinton, and …. Well, we’re still fighting a war on drugs that with enormous costs in dollars and lives, based on fundamentally false premises. I think we’re starting to realize this is crazy, but we’ve still got a ways to go.