A new Firebird, and a great egret

Whew! We finally made it to the start of the new Carolina Ballet season. After a long summer without any dance, I was particularly looking forward to the CB’s first program, with The Firebird as the featured work. And I was particularly excited to see Alyssa Pilger make her debut in the role of Firebird.

Full disclosure: based on a donation to the company, we were invited to be the pointe shoe sponsor of a dancer, and we picked Alyssa. She was then in her second season with the company, and struck us as especially talented. It’s been fun getting to know her. The Firebird is a big, difficult part, and not usually (maybe never) danced by such a junior member of the company. I went over to see her first performance of the role at yesterday’s Saturday matinee, and felt a few butterflies, like an anxious parent.

Fortunately, she was fabulous! I’ve seen Weiss’s ballet to the great Stravinsky score at least twice before, and always enjoyed the solos for the magical sparkling red bird. The creature flits, darts and dashes, with sudden quickness and sudden stillness. Alyssa’s creation was a firebird of elegant exoticism and power. Out at the end of her long arms, her hands seemed almost like individual creatures, sending their own strange messages. With some of the extreme stretches and twists, it was easy to believe she was part bird. I found her performance completely transporting. It gave me goosebumps.

I also really enjoyed Zalman Raffael’s new ballet, Brahms’ Violin Sonata No 3. I’m a Brahms man from way back, and know this great piece very well, but it never occurred to me that it could be a ballet. If it had occurred to me, I wouldn’t have guessed that a young choreographer would grasp and know what to do with its complex romantic pleasures. Indeed, I don’t know many people who care much for this music, which sometimes makes me wistful. 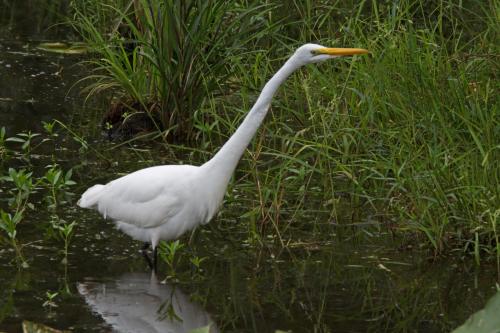 Raffael, however, left no doubt of his grasp of Brahms. I found the ballet faithful to the spirit of the music, while managing to push against it and find new aspects. Jan Burkhard’s pas de deux with Yevgeny Shlapko showed tremendous emotional range. She was lovely and languid in the slow movement, as well as fiery in the finale. Jan has always had a lot of vivacious charm, but she seems to have extended her range into the darker modes in recent seasons. Yevgeny also looked great (he must have spent some time in the gym this summer). 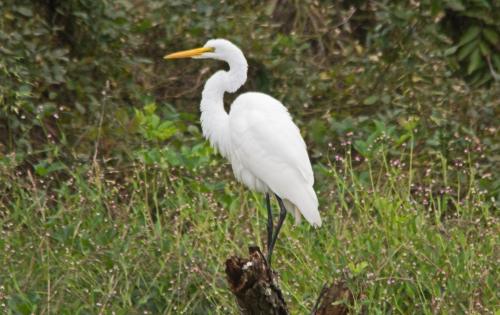 The other piece on the program was a new ballet by Robert Weiss called Les Saltimbanques. The music, Stravinsky’s Symphony in C, was Weiss’s primary inspiration. The piece, which I was not familiar with, is not as tuneful and romantic as The Firebird, but instead is more polytonal with irregular accents. Here too, I thought the choreography was faithful to and illuminating of the music. The organizing idea of the ballet is street performers (acrobats, clowns, and the like) filtered through a Picasso-esque vision. I found it bright and involving, and look forward to seeing it again next week.

These pictures were taken this morning (September 14, 2014) at Yates Mill Pond in Raleigh. The great egret is a bird we don’t see every day around here. I watched this one hunting for a half hour or so, and was enraptured.