Wreck diving off of Cape Hatteras

Sally and I did a diving trip out of Cape Hatteras last Thursday-Sunday. Although we live in North Carolina and love diving, these were our first NC dives. We’d assumed that the sea life in the vicinity would be sparse and the visibility poor, and that we’d find it a bit of a comedown after our Caribbean trips. It turned out this was way off. The NC ship wrecks we dove had a profusion of sea creatures and ample light. Thousands and thousands of little fish, and some very big ones.

The most dramatic species we saw was the sand tiger shark. These shark are large (around 10 feet) and look mean. Apparently they are often used as the stock image for news stories about shark attacks. However, we saw dozens of them, and all were placid. They didn’t seem frightened of us, as was true of most of the species we saw, and we swam within a few feet of each other. They are beautifully designed and graceful, and of course, imposing.

I try to think of sharks in the way I think of bears — creatures that are potentially dangerous, but also fascinating parts of the natural world. They are not programmed killing machines or embodiments of evil. Shark attacks on humans are rare, and fatal attacks are freakishly rare — about ten a year worldwide. The risk of being killed in a shark attack is substantially less than being struck by lightning, or by an elephant. Also, as I learned this week, way less than the risk of being killed by a dog.

Why do most people fear them so much more intensely than, say bears or lightening? Shark phobia runs deep, and it’s unfortunate both for sharks that become victims of humans (100 million a year) and for humans who experience pointless fear rather than rapturous awe. 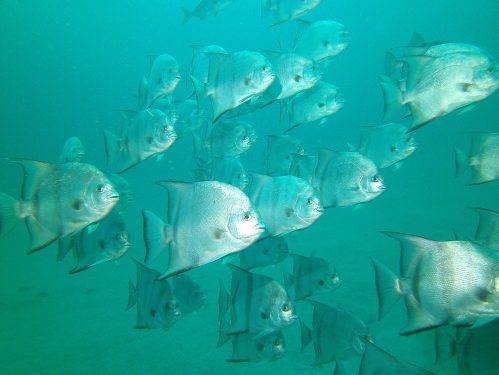 On this trip I tried underwater photography with a beginner-level underwater camera by Sea Life. I was glad I’d waited till I was reasonably competent as a diver to try this, because it could distract from doing the things that have got to be done in diving and enjoying the basic experience. But I was ready to give it a shot. Most of the images I got were not great, but I liked a few, and I had fun hunting for interesting things and fun looking at them afterwards.

NC wreck diving involves boat rides to the ship wrecks. Our longest trip, to the Proteus, took about two and a half hours. I wasn’t looking forward the boat ride part of the experience, but we had good weather — mostly clear skies and calm seas. Our vessel, the Under Pressure, was a 41 foot former commercial fishing boat that was substantially unfitted to accommodate six diving customers. It had a special lift on the back of the boat to haul out divers.

Once well offshore, out of sight of land, I was struck by how horizontal the landscape was. 360 degrees of flatness. At the same time, the quality of the water, its color and its energy kept changing. We saw flying fish, jumping dolphins, and one sea turtle on the surface. There were various gulls, pelicans, terns, and other sea birds. I spent part of the travel time recalling some of the great poems of Yeats, Frost, and Stevens.

Besides the Proteus, we did dives on the Dixie Arrow, the Kashena, the Monihan, the Abrams, and the tug near the channel. The wrecks were in varying states of ruin, but had attracted lots if life. Besides sharks, we saw a good number of sting rays, barracuda, tuna, snapper, a large sea turtle, and the occasional butterflyfish. Several people saw an octopus on the Arrow, but we missed it. We saw enormous clouds of thousands of tiny fish, which the locals refer to as “bait balls.” 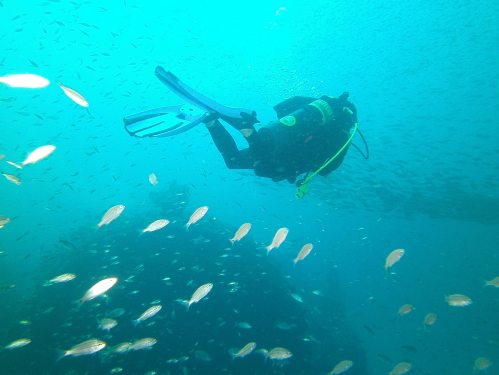 Visibility for most of our dives was good — more than 70 feet. Our deepest dive, to the Proteus, was about 120 feet down. Bottom temperature was around 80. Current and waves were minimal for the first three days, though more challenging for the final day. I had an oxygen leak (which turned out to be from my BC inflator), which required me to cut the dive short and to ask Sally to share her air as we came back. Fortunately, she agreed. It was a learning experience.

Speaking of learning, I need to give a special shout out to Scott Powell, owner of Down Under Surf and Scuba, who organized the trip, led our group, and taught my course in wreck diving. Scott is a diving professional of the highest caliber, but he seems to really enjoy helping those of us less accomplished. He’s one of those rare gifted teachers that just loves his subject, never make you feel inferior, but make you excited about getting better. His passion and enthusiasm for diving are infectious and inspiring.