The way to San Jose, Ridge Winery, and E.O. Wilson on human nature 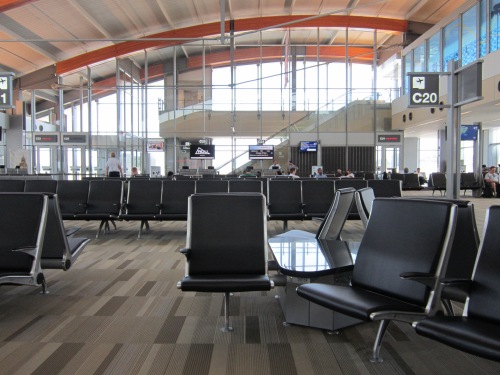 I missed my flight out of RDU on Tuesday morning after trying to send off one too many emails. On the drive to the airport, as reality set in, I went through the five stages of travel anxiety: concern, serious concern, alarm, panic, and finally, acceptance. By the time I made it through the American Airlines queue and the agent said I was too late, I was able to agree calmly, and ask politely what my next best option was. She put me on standby for a flight three hours later.

With my unexpected airport time, I got an excellent shoe shine and a half-hour chair massage at Express Spa. A couple of times a month I try to get a chair massage from the Red Hat massage therapist, which I had to miss because of my trip. I was interested in some work on my shoulder, where there have been minor issues. I assumed that an airport massage would be more about feeling pleasant than serious therapy, but I was not averse to a release of some endorphins. 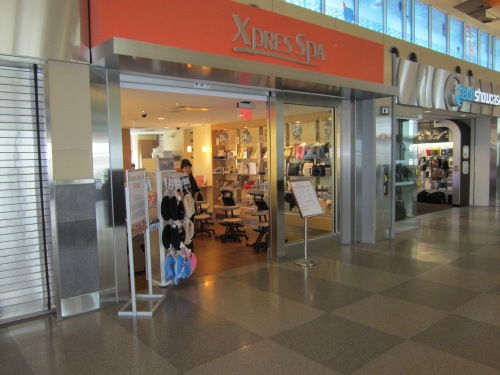 My masseur, a small guy from China, asked how hard I liked it. I said pretty hard. He obliged with a serious deep tissue approach. It took all my determination to resist begging for mercy. At one point I took note that massage therapists are required to pass a licensing exam, as it was coming into focus that massage could cause bodily harm. Then I realized I had no way of knowing if my guy was licensed. He finished with some blows that shook me like a punching bag. It was almost frightening. But once it was over, I felt great!

Being on standby involves a degree of anxiety. You’re either barely making the flight, or you’re going back to square one. On this trip, the gate agent said the I had a good chance of getting on the flight out of Raleigh, but a less good chance of getting on the connecting flight in Chicago. When I felt a wave of tension, I took a few deep calming yoga breaths, and tried to stay positive. Eventually, four and a half hours late, I got to San Jose, got a rental car, and headed to the hotel.

I was assisted by a Garmin GPS device, which smoothly directed me through every turn. This little tool has greatly reduced the anxiety of travel to unknown lands. Getting lost is almost a thing of the past. I still carry printed directions as a fail safe system, but I haven’t used them in a while. Thus have I outsourced a part of my mental load, and in using this now-common tool become a little more of a cyborg. I could lament the possible loss of map-reading skills, but won’t. Thanks to Garmin and all the scientists, engineers, and technicians who’ve reduced my worry level and bestowed more creative mental space. 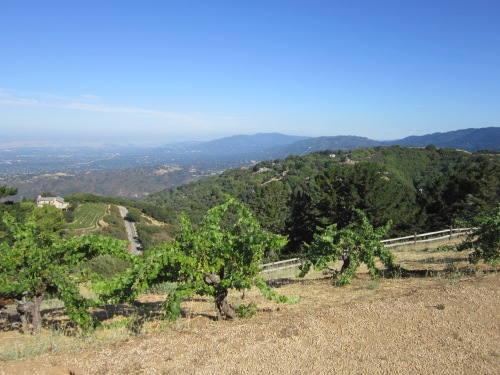 There’s something about northern California that I really love. It isn’t the glamor, which I was far from, but it may be something about the light. After various meetings, I got a chance to tour Ridge Vineyards in the Santa Cruz mountains. It involved a drive ascending 2,0000 feet along narrow roads with hairpin turns. The landscape was dry and craggy.

Our tour guides were experts and scholars of wine making, and I got a deeper understanding of the significance of soil and water conditions, vine life cycles, vine placement and spacing, pests, harvesting techniques, pressing, oaking options, considerations for blending, and aging decisions. The vineyard mountain views were beautiful, and the wines were excellent. It was also a great pleasure to meet our guides and experience their joy and passion for their craft. 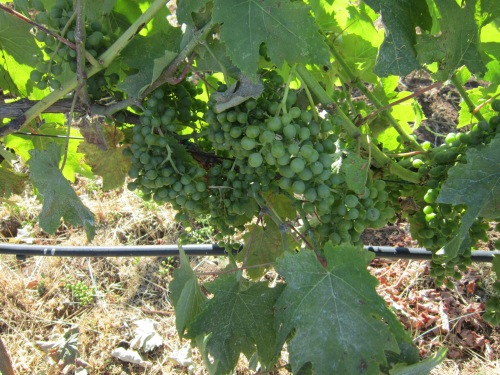 On the long flight home, I finished reading for the second time The Social Conquest of Earth by E.O. Wilson. Wilson, a senior professor at Harvard, is one of our foremost experts on ants, but his scientific passions are wide-ranging. In this latest book, he attempts to revive and develop an approach to evolution that includes selection not only at the individual level but also at the level of groups. He argues that this accounts for some of the defining characteristics of homo sapiens, including our intense desire to be part of a tribe or group and our superlative skills at interpreting the thoughts, feelings, and intentions of others.

These skills made it possible for our ancestors to cooperate in a way that led to success versus other animals (including predators and our close relatives the Neanderthals), and to collaborate in agriculture, technology, and artistic expression. He also thinks multilevel evolution (individual and group) accounts for our never-ending interior conflicts between the urge toward cooperation and altruism (which benefits the tribe) and the opposite urge to seek competitive advantage over other individuals. 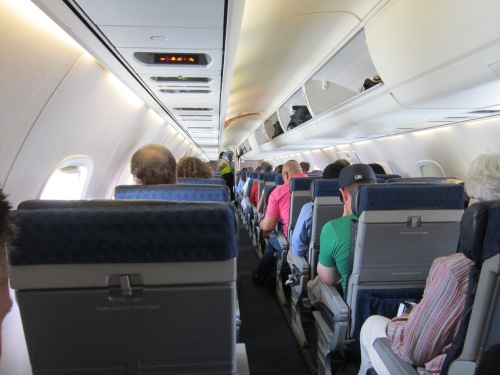 Wilson has a persuasive account of the origins and persistence of religious thought. In his view, it is characteristic for human animals to generate narratives to explain the unknown, and thus natural for communities to compose creation myths. Myths and rituals are adaptive in creating group cohesiveness, which contributes to tribal success. Religion has inspired great art and helped groups and individuals in difficult times. But Wilson ultimately concludes the costs of religion thinking outweigh the benefits, particularly once humankind acquired the tools of science.

Wilson would admit that the evidence for his multilevel approach to evolution is incomplete, and his theory is bound to be controversial. But right or wrong, I admire his willingness to engage and take some intellectual risks on the big questions, like the nature of human nature and the foundations of morality. He brings to the table spirited curiosity and the ability to draw on recent discoveries from biology, neurology, genetics, anthropology, climatology, and paleontology, not to mention, of course, myrmecology. He demonstrates the use of science as both a method and a world view — a world view that is both practical and inspiring.

My flight out of San Jose left 20 minutes late for Dallas, and my original Dallas connection was only 25 minutes. Dallas is a big airport, and getting from a gate on one side to a gate on the other can easily take 30 minutes. It seems I never leave from a nearby gate, so I had some worries, and took some yoga breaths. We came in at A37, and the flight out was at A33. I heard the announcement for final boarding for Raleigh as I stepped into the terminal, and took off in the OJ Simpson airport sprint. (I’ve noticed that gate agents sometimes look around for last second sprinters.). I was the last to board. Kind Fortuna!

Shortly after I got home, we had a thunderstorm and a strange sunset. 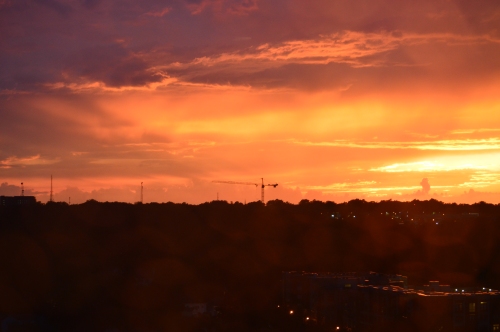 There were some birds this morning at the boardwalk off of Raleigh Boulevard. Most of them hid from me (like that small bird in the Frost poem), but a robin, a great blue heron, and a mallard family didn’t. 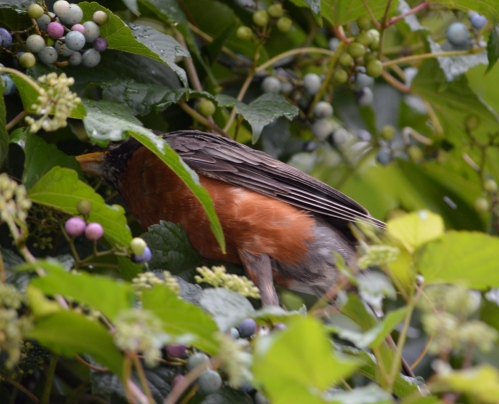 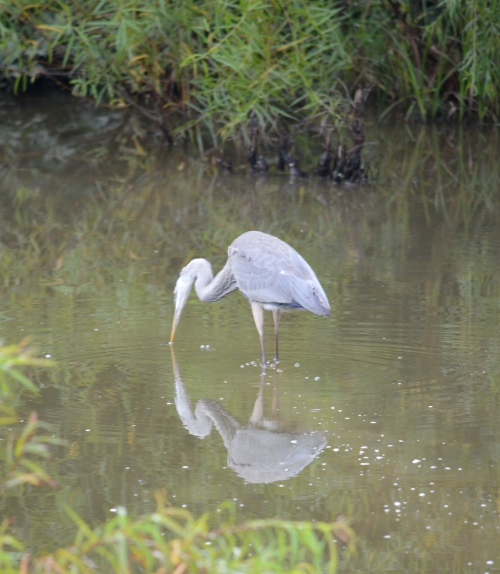 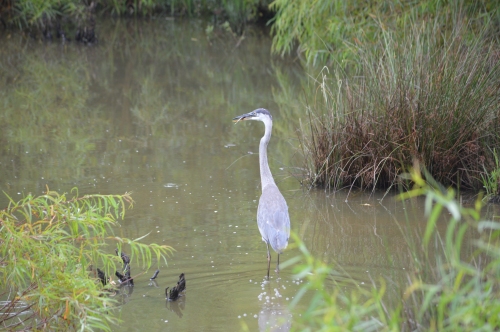 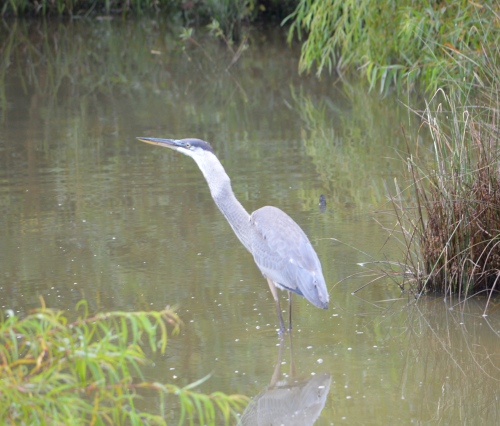 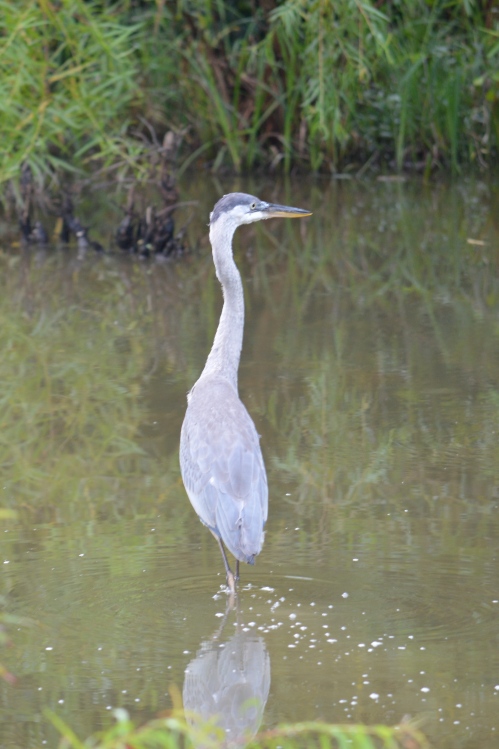 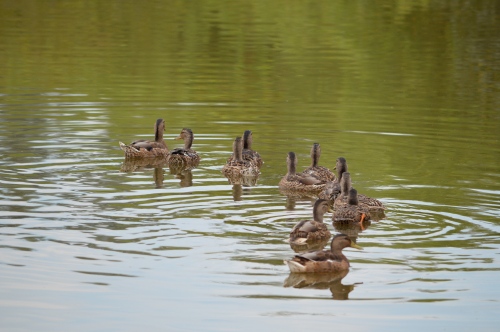