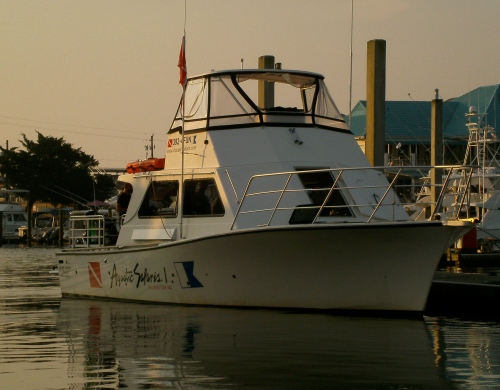 For Labor Day weekend, Sally and I went down to Wrightsville Beach, NC, for some wreck diving and extended our lucky streak of exceptional coastal dives. Our trip was organized by our friends at Down Under Surf and Scuba, and we went out on the Aquatic Safaris I. The 48-foot boat I carried 19 divers.

Saturday was warm and clear, with mild breezes and fairly calm seas. We dove the City of Houston, a passenger-freighter that foundered in a storm in 1878. She lies about 50 miles from Wrightsville. It took two and a half hours of hard traveling to get there. Shortly after we anchored and I visited the head, I felt queasy and promptly got sick. Then I felt mostly better, and we jumped in and headed down the anchor line to the wreck. 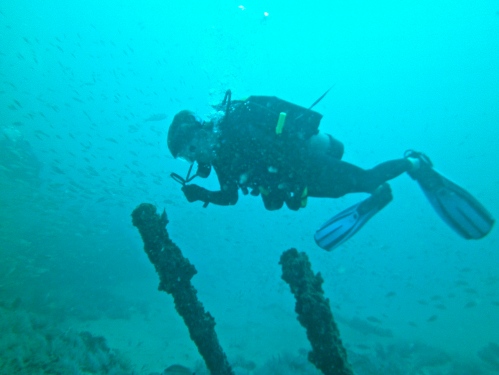 The Houston lies at about 95 feet down. Visibility was good (perhaps 60 feet) and the water temperature was a comfortable 82 degrees. There was a mild amount of current on the bottom. There were thousands of small fish. Our most dramatic sighting of the day was a goliath grouper, an enormous fellow, almost six feet long. My camera battery gave out when I tried to get a picture. I did, however, get some other pictures, including Sally examining something tiny with her magnifying glass (above) and great clouds of small fish. 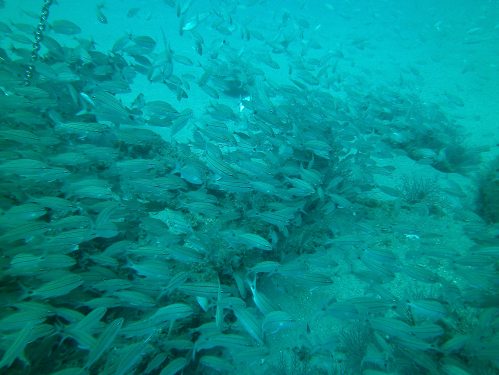 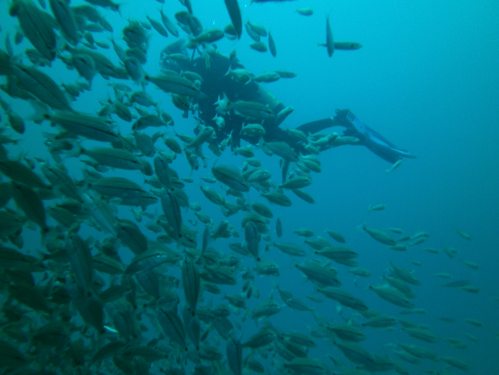 After a second dive on the Houston, we headed in. Our seats were metal benches along the sides, in front of our tanks, so we couldn’t lean back and sleep. Some of our dive mates stretched out and slept on the deck, so it was difficult to move about as the boat sped along at a quick 25-knot pace. Diving sometimes takes fortitude.

We had a good Italian dinner with Sally’s sister in Wilmington at Nicola’s. There were a number of appealing vegetarian offerings. I had the eggplant rollatini with pink sauce, which was quite tasty. We had a lively conversation about, among other things, the automation of higher education, and how it is threatening the traditional university. 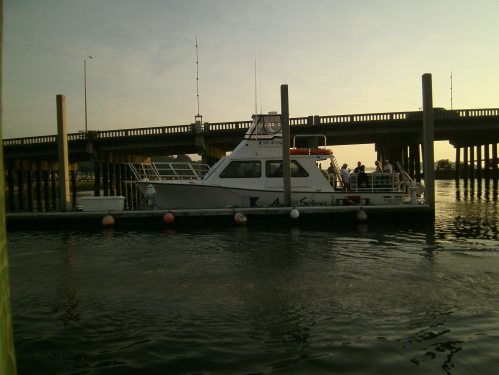 On Sunday we went out again on the Aquatic Safaris I, this time for a two-hour trip to the Normannia, a Danish freighter that foundered in 1924. The seas were calm and the trip went smoothly. I didn’t get sick. The wreck is about 115 feet deep. Like the previous day, the visibility was about 60 feet and the water was comfortable.

Even more than at the Houston, the Normannia had an amazing profusion of life. Along with thousands of small fish, we saw barracuda, a couple of gigantic lobsters, a well camouflaged frogfish, and my favorite, queen angelfish (several). I went to some trouble trying to get a good picture of one, and though these don’t really do it justice, they were the best I could do. 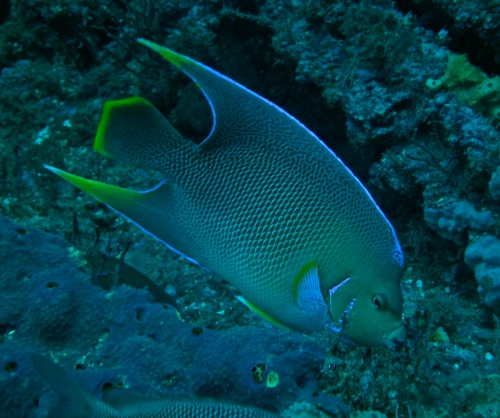 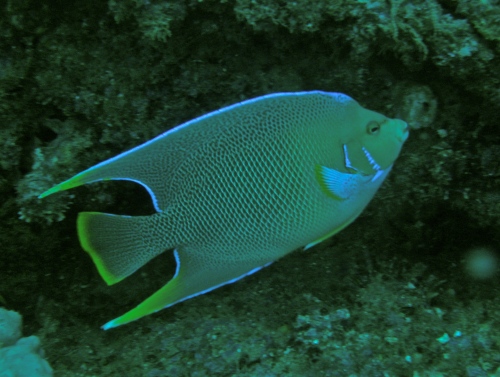 It is such a great pleasure to swim among fish. At times we were completely surrounded by thousands of small ones, and at times we swam alongside large ones. As I dive more, I feel increasingly touched by their beauty. They are amazingly varied in size, shape, color, and ways of moving about. Recent research indicates that they are much smarter than we’ve thought. For example, some can very quickly learn complex topography of a reef environment. 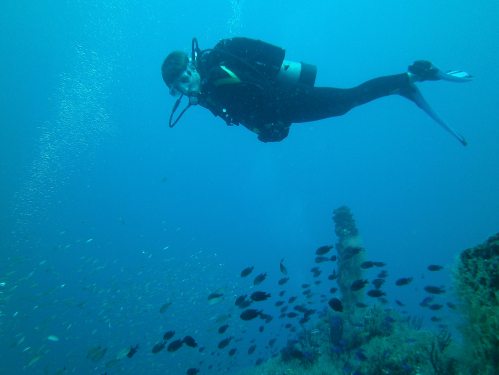 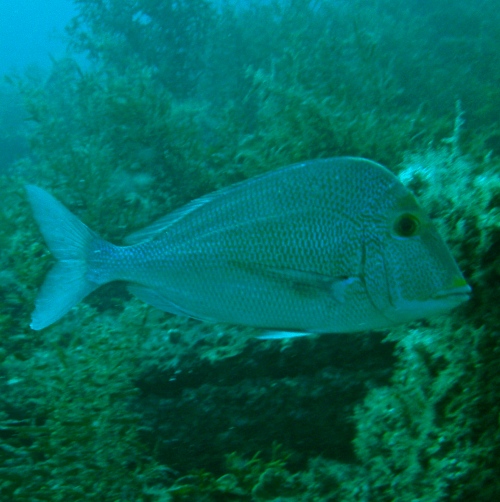 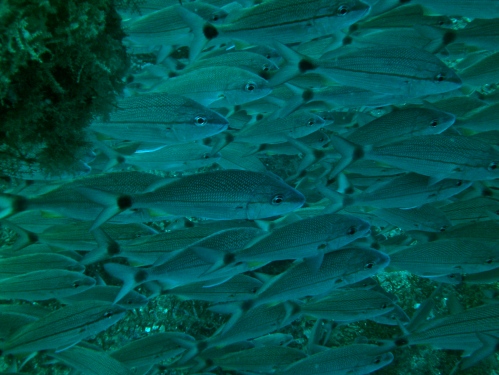 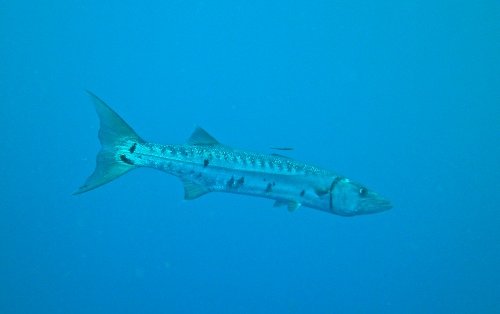 As I’ve spent more time with these creatures, I’ve come to consider them sentient beings worthy of respect and compassion. I regret to say I’m in a minority on this point. Among my fellow divers were some with spear guns and one who was capturing lobsters. I found it really painful to see him take an enormous lobster, perhaps decades old, and break off its antenna and shove it into an ice chest to suffocate.

My shipmate seemed otherwise a decent and friendly fellow. I’m certain he was not trying to torture the creature, though that was what he did. He didn’t derive pleasure from being cruel. He simply couldn’t comprehend that the animal was capable of suffering. I think he and others would find that expanding the circle of compassion to more animals is a happier and more fulfilling way to live.

Speaking of intelligence, I read recently that the human brain was unlikely to get larger in the normal course of future evolution, because it would serve no purpose. Brains working in isolation are not how things get done. Instead, as E.O. Wilson has pointed out, it’s humans’ ability to connect their individual brains that has been the secret to their evolutionary success. We keep getting better at that, developing over the millenia the tools of gesture, spoken language, and written language, with the internet being the latest game-changing technology.

In the midst of the depressing mendacity and nonsense of the Republican convention, I find it somewhat consoling to look at intelligence as potentially expanding through better networks. The Republicans are profoundly mistaken in thinking that entrepreneurs act primarily as fully independent rugged individualists. It’s more accurate, and also more useful, to look at achievement in terms of groups cooperating and competing. Our future success, and perhaps our survival, depends on our ability to improve our systems of cooperation, including our politics.

Food is not only good to eat. It’s good to think about, and also sometimes bad to eat. Here’s some food news from today’s NY Times — a piece headlined While Warning About Fat, U.S. Pushes Cheese Sales. http://tiny.cc/fsi57. It turns out that millions of our tax dollars go towards encouraging cheese eating. Some of the taxes we’ve paid have gone to develop fast food with more cheese in it, such as a new super-cheesy type of Domino’s Pizza.

According to the Times, cheese is now the largest source of saturated fat in the American diet. Saturated fat is linked to heart disease and obesity, which are associated with premature death. Of course, cheese tastes good, and eating a little isn’t a huge risk factor. But why would we even think about involving government in promoting it?

Apparently the reason has to do with a special interest: the dairy industry. People are getting the message that the fat in milk is unhealthy, and buying less high-fat milk. This means dairy producers have excess capacity. Too bad for them. Subsidizing cheese is like subsidizing tobacco. It’s not only dumb — it’s wrong. Here’s an idea for Republicans interested in eliminating wasteful government programs: let’s cut this out.

When we had dinner at home Thursday night, Sally and I talked about our own eating decisions and customs. This is a subject we try to avoid when eating in company, because it detracts from the enjoyment of food and friendship. When the issue of vegetarianism comes up, some non-vegetarians are curious, but others react defensively. For most people, it involves thinking about animals and nutrition in a different way that is at first uncomfortable. For us, it has involved many years of both thinking and practical experience that are difficult to reduce to a short explanation. And there are many topics for dinner conversation that are easier and more fun.

Yet not discussing it bothers me almost as much as discussing it. As with other enormous moral issues such as slavery and genocide, the decision not to speak out has moral implications. I try to be as honest as I can about my thoughts and feelings, and dislike leaving the false impression that the basic cruelty of industrialized animal production and consumption is a minor matter, or that I think it’s fine to kill sentient creatures when there are better choices easily available.

But giving value to the welfare of animals or changing eating habits goes strongly against the grain of our culture. Our habits of eating have deep roots and a multitude of personal associations and meanings, and it’s hard for most people to think about changing them. So we have a kind of gridlock involving morality and culture: it’s morally unacceptable not to confront the situation, and also culturally unacceptable to do so.

So I’m very happy as a plant-based eater that my values and eating habits are better aligned than ever before. (I should note that I don’t think they’re by any means perfectly aligned, and should confess that I still eat some cheese.) I’m very happy that I have interesting, varied, tasty meals a high percentage of the time. I’m also very happy that my diet is doing a lot of good for my health. But I’m not so happy that this puts me at odds with some people.