We got up to New York City last weekend, where we visited Jocelyn and Kyle, did some wedding planning, saw some art, and heard some great music.

New York never stops changing.  More and more, once common and likeable little businesses, like Greek diners and pizza parlors, seem to be disappearing, while other less-lovable ones, like towering luxury condos, are expanding.  When we went down to Chelsea, we went by the new Hudson Yards skyscrapers, and noted lots of bigness. This week the NY Times architecture critic did a scathing review of the project, with some fantastic animated graphics.   I recommend checking it out.

On Friday, Sally and I went to the Robert Mapplethorpe exhibit at the Guggenheim, and liked it.  His mature work was mostly black and white portraiture of famous or beautiful people, done with classical rigor and exactitude.   Mapplethorpe’s subject matter included unashamed homoeroticism and S&M, which was, and still can be, shocking. He challenges non-gay people to be more tolerant and receptive. We also went to the Matthew Marks gallery to see some new work of Jasper Johns.  The artist is now 88, and I was not expecting anything particularly new from him.  But the work was strong! It was inspiring to see such vigor from an almost nonagenerian.   Afterwards, we looked in several other Chelsea art galleries. 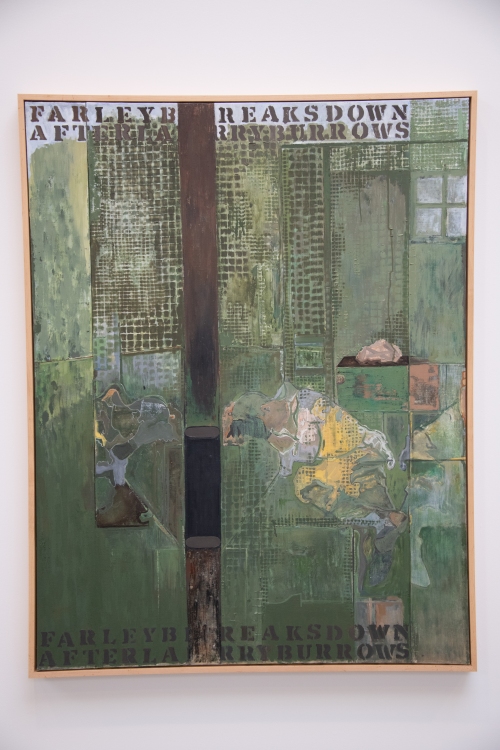 One of the new J. Johns

On Saturday Sally and Jocelyn did wedding-related shopping, and I went to the Armory show.  This annual four-day art fair, located on piers on the West Side, featured galleries and contemporary artists from all over the world.  The crowd included international jet setters, students, and all types in between. There was a lot of art I didn’t care for, though some of the things I didn’t like I still found worth thinking about.

That’s one of the things serious art does:  gets your head and your eyes working. You start seeing lines and curves, lights and darks, colors and textures.  And of course, you experience a gamut of emotions, from joy to disgust. You may also consider the social aspect of art, from its relation to status and hierarchy to efforts to discover and convey truth.

At the Armory show

On Saturday we went to the Metropolitan Opera to see Verdi’s Rigoletto.  This production was set in Las Vegas in the 1960s, with the main characters part of a casino-based crime family.  I didn’t love the concept, but I did love the performance by Nadine Sierra as Gilda. Her famous aria, Caro Nome, was really touching and beautiful.  The wonderful opera podcast Aria Code, with Rhiannon Giddens, had a segment on the music and psychology of this aria a few weeks back, with Sierra as the featured singer.   It gave me a deeper appreciation for the music, though I have to say, I thought her live performance was much better than the podcast one.

On Sunday morning we went to the Metropolitan Museum and spent some time looking at their exhibit of Dutch painting of the 17th century.  I have a minor obsession with Vermeer, and usually find other great work of that period enjoyable. We also had a look at the pioneering photography of Giraux de Prangy, who, in the early 1840s, traveled around the Mediterranean taking the first ever daguerreotypes of the major architectural monuments of western civilization.

Finally, we looked through the Met’s abstract expressionism exhibit, which had a lot of wall size art.  Some of these paintings still work for me, but increasingly they seem as uncontemporary as Vermeer. Artists are still mining the abstract expressionist vein, along with every other prior vein from Impressionism onward, and people are still enjoying and buying such work.  But more and more, I’m on the lookout for a path to a new kind of artistic language.

There was an essay in the Washington Post this week by Robert Kagan entitled The Strongmen Strike Back, which I hope will start an interesting discussion.  Kagan argues that there is a common thread connecting the various authoritarian regimes that have emerged in the last couple of decades, including in Russia, China, Egypt, Hungary, and elsewhere.  Instead of ideology, these regimes are founded on idealization of traditional cultural touch points of race, religion, values, and status hierarchies. He suggests an answer to something that’s really been puzzling me:  the acquiescence and even support of a lot of American conservatives for Vladimir Putin. He thinks it isn’t just a bloody-minded rejection of liberalism, but a defensive embrace of traditionalism.

Kagan thinks that traditional liberalism has offered individual rights and freedom, but hasn’t offered enough to those who feel their religious and other cultural preferences need protection.  That seems possible. But Kagan doesn’t say much about the fearmongering and disinformation that seems to be a common thread among the new authoritarians. His vision of liberalism seems to embrace traditional American imperialism and preferential treatment for elites.  I don’t think he’s really proposed a workable solution to authoritarianism, but he’s given some helpful new vocabulary.

In these fraught times, I’m always on the lookout for cheering news, and was really cheered this week to read about the young students around the world who mobilized to address climate change.  There were protests in a hundred different countries and 1,700 locations, according to the Washington Post. As some of the students pointed out, adults have created a dire environmental crisis, and the world they threaten to leave to their children looks distinctly worse than the one they themselves got.  This is part of the moral imperative for addressing climate change — protecting the next generation, and the ones after them.