Saturday morning was overcast and chilly.  I put on some layers and warm gloves and went up to Shelley Lake to check on the birds and take some pictures.

There were a few dozen ring-billed gulls that mostly bobbed on the lake, but occasionally took to the air for some fast acrobatic flying.  Back home, when I looked at my pictures, I saw a pattern: when there were groups of gulls, they were usually chasing a gull that had some food.  That seems mean! A friendly passerby pointed out a couple of eagles sitting in a tree on the other side of the lake. I also enjoyed seeing the double-crested cormorants, Canada geese, and great blue herons.  The shots here were taken with big heavy lenses (Nikkor 80-400mm, and Sigma 150-500mm), and no tripod. Why are some birds so beautiful?  This weekend I read a really good piece in the NY Times on this by Ferris Jabr:  How Beauty is Making Scientists Rethink Evolution.  Some birds, like peacocks, are extravagantly gorgeous, with colors and shapes that seem to make them easy targets for predators.   This seems to contradict some of Darwin’s theory of natural selection (“survival of the fittest”), and after 150 years scientists have still not agreed on an explanation.

But there’s modern support for the view that natural selection is supplemented by sexual selection (usually, females preferring males that look or sound better).   This implies that the animals have preferences that aren’t purely functional — that is, aesthetic preferences. Jabr’s piece gives a sense of the strong passions of the scientists involved. It’s well worth reading. 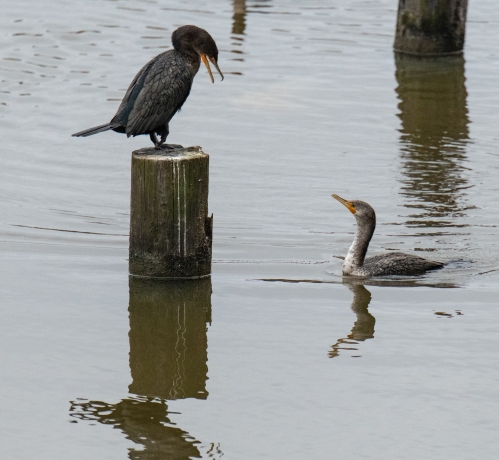 Speaking of animal intelligence, I want to make a note about a particular fish who captured my heart when we were scuba diving in the Bahamas.  As we prepared for a dive onto a ship wreck, our leader recommended we look around for a friendly grouper they called Binks, who she said liked to be petted.  Near the end of the dive, I looked over the top edge of the wreck and saw a little grouper (perhaps 18 inches) watching me. I extended my arm, and he came up and nuzzled my hand.  I petted him with gentle strokes, like a dog. Binks was such a sweet little fish! I was startled at Washington Post’s report this week that recent studies have found oceans are warming significantly faster than had been thought.  Oceans cover 70 percent of the earth.  Warmer oceans mean rising sea levels, more severe weather disasters (hurricanes, cyclones, droughts, etc.). This is terrible for many living creatures, including humans, and fish, including Binks.

The Sierra Club magazine this month had an encouraging piece titled There Is No Planet B:  It’s Up to Us to Craft the Shape of the Future, by Kim Stanley Robinson.   Robinson acknowledges the possibility of mass extinction, but outlines the possibility that we can still reverse course.  He notes that need to rethink some of our traditional capitalist assumptions, which will not be easy. But those assumptions were created by humans, and they can be changed. Two bald eagles on the far side of the lake

Finally, I need to give a shout out to CPR — that is, Cell Phone Repair, a local business at Holly Park, off Wake Forest Road.  I discovered last week that I’d broken the camera in my Samsung Galaxy S7 device. The guys at CPR said they could get it fixed in 3 hours.  I asked if there was anything to be done about my weakening battery, and they said, sure, they could help me out with a new battery. They got it done in 2 hours, and everything worked great!