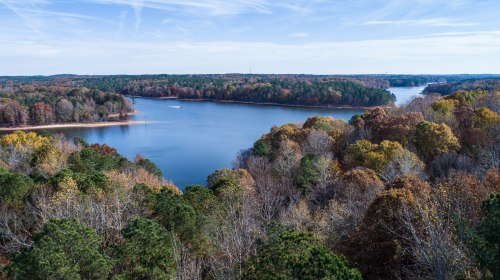 Coming home from the concert in Durham on Friday night, I stopped to look for the Leonid meteor shower.  I hiked into the fields at the N.C. Museum of Art, which were dark enough to hope for good sightings, and also isolated enough to give a little twinge of fear.  But it was peaceful looking into the clear eastern part of the night sky, with stars shining bright.  I didn’t have much luck spotting meteors, which may have been shooting to the west where it was more cloudy. 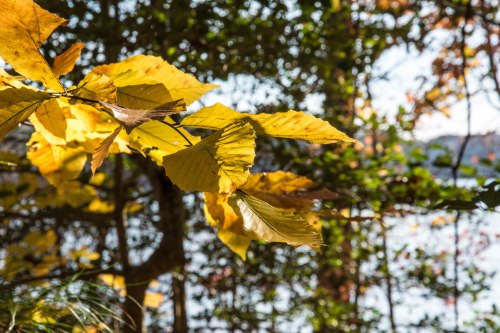 On Saturday morning I went up to Blue Jay Point to see some fall colors and take some pictures.  The dying leaves have not been very bright this year, but there was still some beauty there.  It was calming to walk in the woods and along the shore of Falls Lake, which was very quiet apart from a couple of passing motor boats.  It can be tricky keeping on the path this time of year, with everything covered in brown leaves, and I did in fact get off track on the way back, though I wasn’t lost for long.  I also took a fall when I tripped over a tree root that appeared out of nowhere.  My right hip got bruised, but fortunately the camera was OK.

Sally and I finally got to the movie theater to see Blade Runner 2049.  I really liked the original Blade Runner, which had a visionary quality (though a fairly grim vision) folded into an intense sci-fi story, and had high hopes for the sequel.  The new movie was likewise a disturbing prophecy — a world where natural resources have been exhausted, inequalities have widened, violence is endemic, and humans lord over a race of human-like robot slaves.  But there was a strange beauty to it, and an oddly hopeful theme about new and unexpected kinds of love, including robot love.

The end of nature in the movie, with no trees growing and no birds singing, doesn’t seem too far from where our current trend line could take us.  The situation is dire.  This was the view of a letter  published this week and signed by 15,366 scientists from 184 countries, which I hope will be widely read.  The scientists outlined damages and risks that you probably already know about ( though many still do not), including potentially catastrophic climate change, overpopulation (35 percent more humans since 1992), and mass extinction of “many current life forms.”  They note that time is running out.

But the scientists also note that it is still possible for us to course correct with adoption of sustainable levels of consumption, preserving natural resources, promoting family planning, eating less meat, respecting nature, and prioritizing green technologies.

There are some signs that more of us are waking up.  199 of 200 nations have signed up for the Paris climate accord.   In the U.S., more states and cities are taking action, as Jerry Brown and Michael Bloomberg recently noted  in a NY Times piece, and so are more big businesses.  Despite the ascendance of Trumpanical contempt for nature,  government scientists recently issued a comprehensive climate assessment report that very frankly set out the dire threats to our dear planet.   There’s still hope.

On Friday night, Sally had a conflict, so Olga Kleiankina, my piano teacher,  joined me at Duke’s Baldwin Auditorium to hear the young British pianist Benjamin Grosvenor.  For what it’s worth, the program director pronounced the artist’s name “Grovner” (with no sounding s).   Grosvenor was praised in the New York Times last week as perhaps the most cultivated pianist of his generation (he’s 24), and he did not disappoint.

In the first half, his Bach, the fifth French Suite, was fast moving and elegant, with creative ornamentation,  and his Mozart sonata (K333) was well conceived and elegantly executed.  I think I liked it more than Olga, who did not dispute his technical excellence, but felt that the performance lacked heart.  She may well have heard things I didn’t or expected things I didn’t,  since she is unquestionably an artist.

For the second half, I very much enjoyed Grosvenor’s performance of an Alban Berg’s Sonata op. 1 and of Ravel’s Gaspard de la Nuit.  Gaspard is a quintessential impressionistic piece, and I thought he fully grasped the spirit, with striking virtuosity.  Olga liked it as well.  We ran into a number of our musical friends there, so it was an enjoyable social event, too.