Our trip to Venice 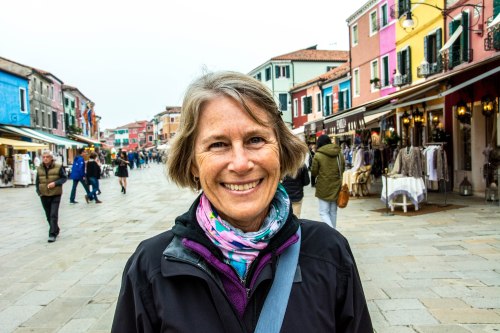 Last Sunday Sally and I got back from a week in Venice, which was a lot more challenging and stimulating than I’d expected.  As everyone knows, there’s a lot of beautiful art and architecture to take in, or try to take in.  I hadn’t understood, though, some fairly basic aspects of the place.

For example, there are no cars, or trucks, or motorcycles.  As far as I could tell, there are no powered terrestrial vehicles in Venice.  It is a city for walkers and boaters.  We walked a lot — between 16,000 and 18,000 steps most days.  And the walking is somewhat complicated — along quays, through narrow alleys, and up and down the steps of bridges over canals.  Once you leave sight of the Grand Canal, it’s easy to get lost in the twisty, narrow streets, though you eventually find your way back.

Given that there’s so much walking in Venice, I was surprised at how bad some people were at it.  People would veer in front of us, or stop with no warning in crowded areas.  I thought at first these must be tourists from places where there isn’t much walking who lack the sophisticated observation and signalling skills of big city pedestrians.  They may have been disoriented by the many luxury shops and other sights.  But it may be that they were just inconsiderate.

That said, most tourists were nice enough, and the service industry people we dealt with were almost all helpful.  I was a little hesitant about using the vaporetto (water bus) system, but the ticket sellers gave good directions in good English.  The system works really well, with many boats running regularly.

For lodgings, we used Airbnb, and found a little apartment with a balcony near (but not too near) St. Mark’s Square.  The young man who owned it  met us at the nearby Giglio vaporetto stop and guided  us in, and gave us a friendly briefing on the neighborhood shops and services.  A few steps from our door was an old leaning bell tower, with bells that pealed loudly at 7:30 each morning to make sure we got up.  There were minor issues (not enough soap and toilet paper), but the pros greatly outweighed the cons, and the cost was a fraction of an equivalent hotel room.

We stopped in many cafes and gelato shops, and ate well.  For dinners, the vegetarian offerings were mostly along the pasta line, but we also had tasty risottos, and one evening had the mother of all gnocchis.  The local wine was excellent.  I expected to come home several pounds heavier than I went out, but in fact gained less than two ounces.  All that walking surely helped.

Mid-October turned out to be a good time for a visit.  Daytime temperatures were in the high 60s to low 70s.  We had some sun but mostly clouds, and no rain.  There were plenty of other tourists, but not so many as to be overwhelming or depressing.

Near the Accademia Gallery

We were there in large part to take in the Biennale, the huge every-other-year art fair with exhibits by many nations and artists.  Most of the art did not involve paintings in frames.  There were many videos, multi-media constructions, music and non-musical sounds, happenings with human actors, and environments.  We looked at a lot, and found quite a few artists with something pressing to say.  There were very strong exhibits from some countries whose governments are authoritarian, including Russia and China.  The artists reminded us that these countries are much more than their leaders and elites. 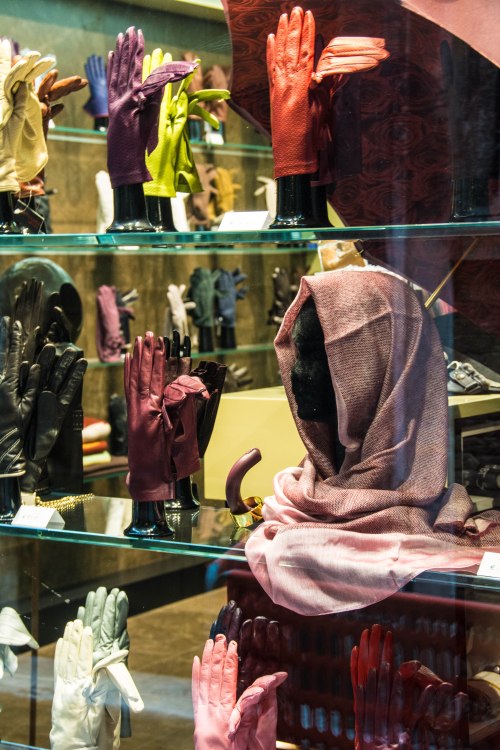 We also loved seeing the extraordinary Renaissance art in the Doge’s Palace, the Accademia Gallery, and various churches, and particularly the Basilica di Santa Maria Gloriosa dei Frari (which is not singled out in every guidebook).  I’ve recently been reading about much earlier civilizations, and so art from five or six hundred years ago felt fairly recent.  Much of this art is devotional, in the sense of being inspired by and celebrating the religious thinking of the time, but some of those thoughts still resonate.  We are touched by the beauty of each new baby, and the suffering of those brutally victimized.

One day we took the train out to Padua, where we saw the marvelous Giotto frescoes at the Cappella degli Scrovegni and the impressive Basilica di  Sant’Antonio.  We got turned around, and unlike in Venice, had no canal to orient by.  We walked 22,000 steps that day.  Another day we took the vaporetto out to Murano and Burano.  In Murano, we saw some glass making, which looked hard to do well.  In one shop a salesman took a determined run at selling us some glass art costing thousands of Euros, but we managed to resist.