My work days are often nonstop meetings, calls, and electronic documents about new technologies and difficult problems, and for several hours my left brain is going at full throttle. I like the intensity, but there are a lot of stress hormones. Without a dose of classical music after work, I’d likely redline and blow up. Playing the piano, even for just a half hour, is like a warm, soothing bath.

One of the pieces back on my musical workbench is Liszt’s famous Benediction de Dieu dans la Solitude. (There’s also some Schubert, Chopin, and Debussy.) I’ve been infatuated by the Liszt piece for a long time, but discouraged from committing to it by two things. First, it has some daunting technical demands, including reaches and stretches that are awkward and even painful. Olga, my teacher, suggested a (to me) non-obvious way of refingering to avoid the worst stretches, and I’ve been working out the details of the new approach.

The other blocker is the length. Most of the piano music I try to master and embody is on the short side by classical standards – under 6 minutes, which I view as pushing the limits of attention spans for most non-specialists. Benediction comes in at around 16 minutes. But what minutes! It’s very lyrical, elaborated by Liszt’s rich harmonies, and conceived with the piano’s singing qualities in mind. Here’s a couple of good and interestingly different performances from YouTube here and here

We’ve been particularly enjoying listening to music since we had our stereo system reworked last week. This was not entirely optional. Our former system involved in-wall and under-floor connections, which ceased working properly after our new floors were installed. Dr. Video, who installed the system, advised that fixing it would be quite expensive. We eventually decided to reposition the speakers on the large bookshelf, and powered them with a Yamaha R-700 receiver tucked in an adjacent closet. The speakers – two NHT Class Threes and a subwoofer – sounded good before, but with the new position and more power, they sound excellent.

We inaugurated the new sound set up with Harmonielehre, a piece for orchestra by the contemporary American composer John Adams. This is one of my favorite orchestral pieces of all time, and that’s including all the symphonies of Brahms, Bruckner, and Mahler. It manages to cover an enormous emotional range, from a bouncy and cheery to fiery and fierce to wistful and contemplative. The harmonic language is mostly tonal, but with piquant dissonances, and the rhythm manages to seem propulsive and natural, though it is anything but simple. It takes you on the journey of discovery, much as Mahler does. I have the version by the City of Birmingham Symphony, but various other are available on Youtube and Spotify. I highly recommend giving it a listen. 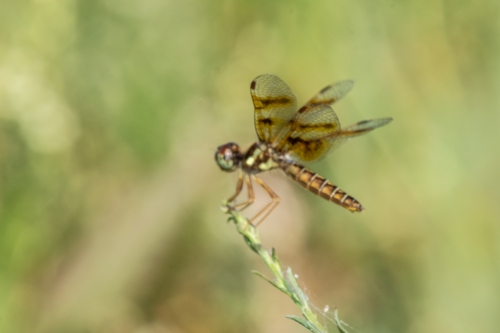 Another great stress reliever is a walk through the woods and around a lake. On Saturday and Sunday mornings, I went to Umstead and Lake Crabtree parks and moved slowly, looking closely in the grasses and bushes for interesting insects. Most of the little creatures I saw did not hang around long enough to have their pictures taken, but I got a few shots I liked.