Last weekend Sally, Gabe, and I drove down to Wrightsville Beach for some scuba diving. We stayed in the Hilton Express in Wilmington, and went out to the wreck of the Hyde on Saturday, and the wreck of the Liberty ship on Sunday. It was good to gear up and get wet again.

The Hyde is about twenty miles out of Wrightsville, and getting there took over an hour, in seas that were a bit choppy. With seventeen divers, the small Aqua Safari boat was quite crowded. Once the tanks were all connected to the gear, there was a ledge of about 5 inches to sit on. It was not comfortable. Several divers got seasick. 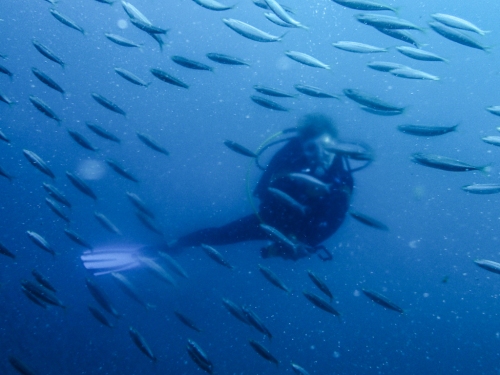 We did two dives on the Hyde, which was about 80 feet down. Visibility there was about 40 feet. We saw sand tiger sharks, southern sting rays, barracuda, and hundreds of small fish. I tried out my new Olympus TG-4 camera with a PT-056 housing and two Sea and Sea strobes. Although I didn’t get any career photos, I liked the feel of the equipment, which much smaller and easier to work with than my last rig, and ran glitch-free. 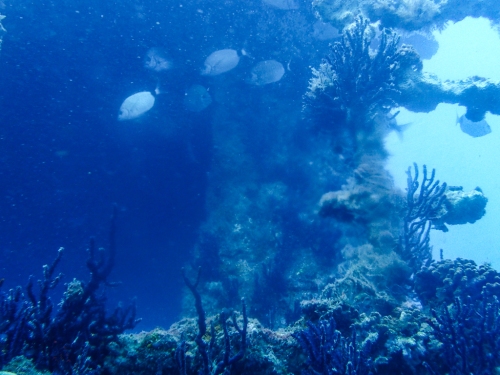 That evening we met up with my sister-in-law, Anne, and ate at a very nice restaurant called Manna. It was relatively upscale for Wilmington, with women in dresses and none of the men in tee shirts. Although there were no vegetarian entrees on the menu, our waiter explained that the chef could whip them up according to our directions or, if we preferred, according to his inspiration. I gave some directions based on the day’s non-meat accompaniments, and Sally decided to trust the chef entirely. We were all delighted with the food and the service.

On Sunday morning, it was only a short boat ride to the Liberty ship. The visibility about 40 feet under was quite limited – about 10 feet – and the creatures we saw on our two dives were all small ones. We were hoping to find an octopus, which didn’t happen, though we did see some oyster toadfish and a striped burrfish. We were happy that we didn’t lose each other in the murky gloom, and that we managed to find our way back to the anchor line and the boat. 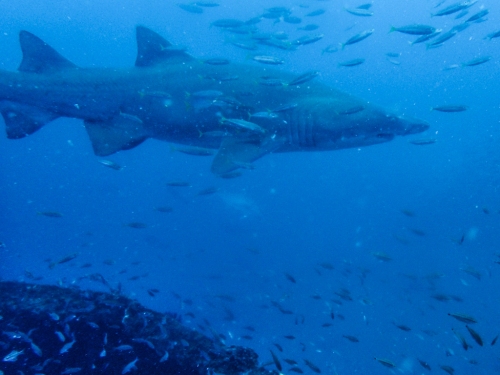