Older athletes, my 5K race, working out with audio books, CRISPR, and Uber 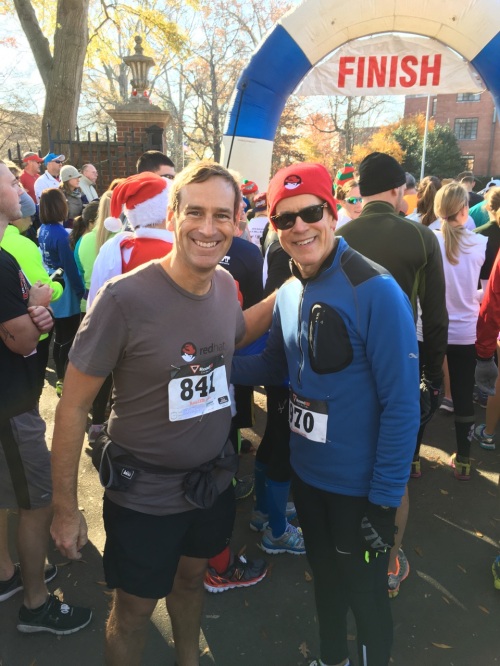 I like stories of successful athletes who have passed the normal age for athletic achievement, for obvious reasons. There was a good one this week in the WSJ, which featured Klaus Obermayer, founder of an outdoor clothing company. At 95, he lives in Aspen, skis whenever there’s snow, does Akido, and swims, along with getting gym workouts, and eats a mostly vegan diet. I’ve previously challenged myself to still be skiing the big mountains at 85, but it looks like I may need to raise the bar.

On Saturday morning I ran a 5K race in downtown Raleigh – the Jingle Bell Run, a charity event for the Arthritis Foundation. It was a beautiful fall day, clear and chilly, and a lot of my Red Hat colleagues showed up at Saint Mary’s School. Jonathan C, an accomplished runner, let me tag along as he did his warm up routine. Sally came along with Stuart and lent moral support.

The route was up and back on Hillsborough Street, which is a long climb going out, but it went OK. On the home stretch, as I passed the International House of Pancakes, I had a shot of pain in my left hamstring, and struggled to the finish. But I still ended up with an official time of 25:12. That’s average miles of 8:10, which was close to my planned best case scenario. Jonathan came in third, at 18:02 (5:49/mile). Sally said Stuart had a nice time: lots of people petted him, and asked his name and how old he was (13).

At the gym lately, I’ve been dividing my time among the various cardio machines – treadmill, elliptical, stationary bike, rowing, and stairs – putting in about 45 minutes of total sweat time, plus core work, resistance training, and stretching. Listening to audiobooks and podcasts makes this a lot more fun. This week I discovered News in Slow Spanish, which is exactly what it sounds like – a podcast for intermediate Spanish learners who like to listen to the news. My comprehension went way up when the announcers slowed way down.

I’ve also been listening to Redefining Reality: The Intellectual Implications of Modern Science, by Steven Gimbel. Gimbel has really helped me with the last 100 years of physics. I’m not prepared to claim deep understanding, but I’m getting more comfortable with, for example, the idea of gravity as a bend in space-time, and matter as just an expression of energy.

We like magazines, but it’s hard to keep up with them. In the last couple of weekends I made good progress in dealing with the pile of New Yorkers, Economists, Atlantics, Opera Newses, and Scientific Americans (but didn’t get to the pile of golfing, photography, and scuba magazines). I finally got a fix on what CRISPR is from a New Yorker piece by Michael Specter, and realized this is a technology that is going to change the world as we know it. The CRISPR tools allow biologists to edit DNA relatively simply and cheaply. This holds the potential for understanding and treating various serious diseases, and also improving food and industrial products. And, of course, there’s the possibility of creating Frankenstein monsters. Anyhow, for better or worse, or both, the genie is out of the bottle.

Last week came the end of driving as we know it – the beginning, for us, of the age of Uber. We scheduled a trip to our old favorite, Caffe Luna, and with a view to avoiding post-wine driving, I downloaded the Uber app. Our first experience was entirely friction free – no telephone call, no waiting, no tipping, and automatic payment, at an entirely reasonable rate. We gave our drivers high ratings, and hoped they did the same for us. I’ve been tracking the progress of driverless cars closely, but had sort of ignored Uber. Now I get it – it’s fantastic. 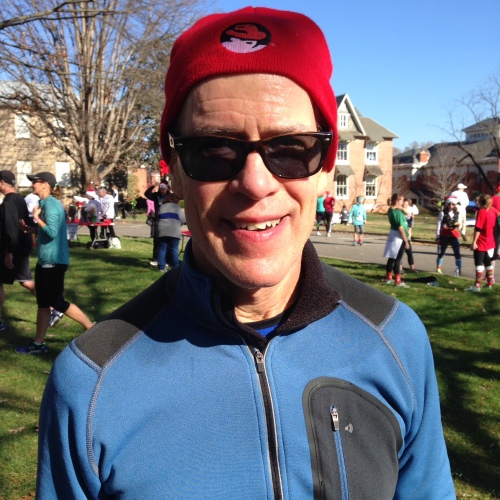