Good grad school news, reading Coates and considering our racism, and some butterflies

Gabe got into grad school! Whew! We’ve all been waiting anxiously to hear from Parsons School of Design, and thank goodness, the news was good. As is his wont, Gabe had considered the issue of grad school carefully, and had worked on his application carefully, and ended up getting the application in rather late. But it worked!

The Parsons program may be done either online or in the classrooms in New York, and Gabe is leaning towards doing the first semester online from here in Raleigh. This would avoid the stress of a last-minute apartment hunt, and would also allow him to work on his promising new relationship. Is this a good idea? The question is not an easy one. For motivated, self-directed learners, on-line can work. These past few months, both he and I have been studying photography and design subjects on-line (e.g. Lynda, Udemy, and free YouTube videos), and learning a lot.

Considering how important education is, it’s remarkable how little we know about what works and what doesn’t. This week I listened to a couple of podcasts from This American Life on the educational effects of desegregation and resegregation, which were bracing. I wasn’t surprised to learn that desegregation improves the educational outcomes of minorities, but I didn’t know that since the mid-80s, our schools have been increasingly segregated. This is another indicator that we haven’t worked all the way through our problems with racial distinctions.

I’ve been reading Between the World and Me, by Ta-Nehisi Coates. It’s currently high on the best seller list, which ordinarily means I’m not in the target market, but this was a big exception. It is a black man’s jeremiad on what slavery really means for our country’s past and present. I’ve found it painful and difficult, but also helpful in understanding our bizarre situation with respect to “race.” I use quotes because evidence is accumulating that race is a social, rather than a biological, construct. Coates argues that it was created to justify oppression, and I believe he’s right.

The legacy of our long history of slavery is unquestionably still with us. As recently as two weeks ago, there was a rally near here in support of the Confederate battle flag. And every day black people are stopped for “driving while black.” Coates makes us understand that those who are stopped believe that the police might well kill them without justification, and if they do, they might well get away with murder. Recent headlines corroborate his view.

We’ve come a long way in my life time in addressing the massive injustice of slavery and racism, but it’s taken a long time, and we’re not done yet. It saddens and shames me to admit it, but as a child in the 60s, I was taught that Negroes were inferior. Not bad, mind you, but lesser. Everyone I knew, good people and bad, thought that and taught that. I remember at first thinking it strange that little children, who called all white adults Mr. and Mrs., all called our black elementary school janitor by his first name. He was Preston. Preston was a sweet, kindly man, but I’m guessing he would have preferred Mr.

Getting that early, deep, wrong imprinting straightened out has been a long journey for me. Along the way getting to know some great black people was critical, but so was literature and film. Reading Ralph Ellison, James Baldwin, and Richard Wright helped. William Styron’s The Confessions of Nat Turner definitely helped. Life on the Run, by Alice Gorman, opened my eyes. Karl Hart’s recent book, High Price, did as well. Hollywood had helped, at times – Amistad, Twelve Years a Slave. Watching the PBS series Eyes on the Prize about the Civil Rights movement helped. And Coates, with his hot burning anger, is helping me, too. I recommend his book.

Some evidence that we’re at least trying to sort this out: the end of Jefferson-Jackson dinners. The Times reported this week that although these dinners have been a traditional fund-raising bonanza, the Democrats are quietly dropping the association to these unrepentant racist, slave-owning presidents. Jefferson has gotten a huge pass from subsequent generations based on his ability to turn a soaring, inspiring phrase (“all men are created equal”), but it looks like he’s finally being held accountable for the things he did to hundreds of humans that were horribly wrong. That’s good.

This is the time of year for butterflies, and I spent some time in the area parks this weekend looking for them. I took the photos here at Raulston Arboretum on Friday after work. Back home, when I got the images onto my laptop, I realized that some of them had been knocked around a bit by life. I considered repairing some of the damage to their wings with the Lightroom healing tool, but decided I liked seeing them as individuals. 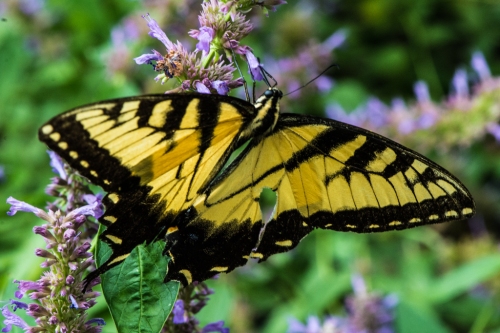