Our anniversary – Astonishing cave paintings – Our TSA – Fear itself

Friday was our 33rd anniversary. Yes, that is something. What amazing good fortune to find my beloved, to persuade her I was the one for her, and to get her to make me the happiest of men. We don’t usually do anniversary gifts, but we gave each other a kiss and affectionate cards, and I gave Sally a little heart-shaped stone, which she said she would treasure always. We had a fine Italian dinner at our old standby, Caffe Luna, where they had good pesto linguine and sweetly treated us to dessert. 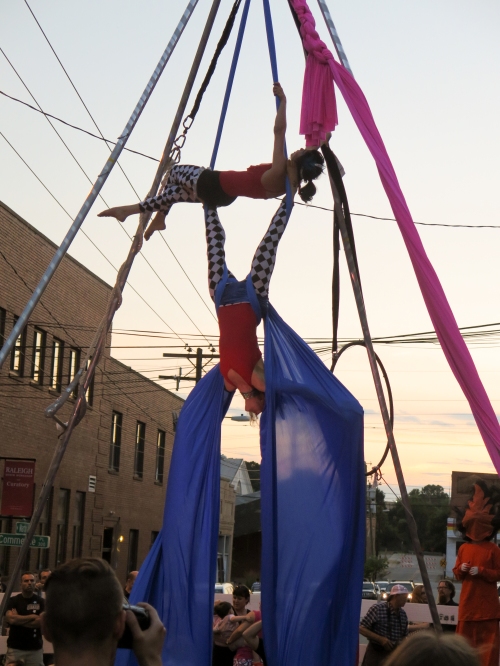 Then we looked in some galleries that were open late for First Friday. At ArtSpace, there were several engaging paintings that had been in a competition, and also some old friends to chat with. In the warehouse district, there was a mini-street fair, with circus performers and musicians. 311 Gallery had some colorful abstract paintings by Joseph DiGiulio that we particularly enjoyed.

On Saturday evening, we cocooned at home: Indian takeout food from Blue Mango (delicious!) and Cave of Forgotten Dreams on Netflix. This documentary by Werner Herzog examines the Chauvet Cave paintings in Southern France. I’d been very curious to see these paintings, and since they are firmly closed to the public, this is likely the closest I’ll ever get. Herzog’s narration is rather stolid, but the paintings are thrilling. Painted some 30 thousand years ago, they depict bison, horses, rhinos and other creatures with astonishing freedom and vigor. Pictures are here.

At the gym, making my rounds among the various weight systems and cardio machines, I’ve been listening to a podcast called You Are Not So Smart. Its subject is human psychology, and particularly the biases and systemic flaws that our thinking is subject to. We tend to feel that our thinking is usually rational and objective, but this is very often not even close to true. Knowing this may sometimes help us avoid grievous mistakes. At any rate, it’s worth a shot.

Case in point: we learned last week that the TSA (the airport screening folks) performed quite badly in tests of their systems. When the testers impersonated potential terrorists, they were able to get forbidden items, like fake bombs and guns past the screeners in 95 percent of the cases. 95 percent! Let it be noted, however, that the screeners might have done better had they been tested on seizing expensive moisturizers and nail clippers.

Seriously, at first, I found this disturbing. And annoying! Think of almost every American air traveler, for years and years, all those hours, waiting anxiously in line – all the taking off your shoes, jackets, and belts, emptying all your pockets, pulling out laptops (but, oddly, not tablets), getting your privates exposed by scanning machines, and sometimes your stuff rifled through, and your self physically groped and interrogated, and occasionally missing your flight – and all of it accomplishing nothing.

The massive inconvenience that the TSA process imposes on the flying public looks like a huge waste of taxpayer dollars and time. But then I realized, we haven’t heard of any airplanes blowing up for a long time. If the TSA isn’t stopping would-be terrorists, and no planes are blowing up, that’s probably because there aren’t many terrorists trying to blow up planes. That’s a good thing! But it also suggests that the terrorist threat is way overblown (as I’ve long maintained).

So why do we put up with this absurd system? The You Are Not So Smart podcast introduces various interesting terms for the psychological syndromes that lead us astray. I’m thinking there should be a name for the particular glitch in the human thinking system that inclines us to widespread panic once exposed to a dramatic dangerous event, like 9/11. Fourteen years after that horrible disaster, we’ve not seen anything remotely close to another such dangerous terrorist attack, and yet we’re obsessed with the idea.

What is the thing that makes us exaggerate our fear so much that we tolerate the TSA’s groping, the NSA’s incursions on our privacy, and invasions and occupations of countries that are not threatening us? Fearophilia? Politicians’ and journalists’ fear mongering helps produce it, so perhaps – mongerization? Probably not. Whatever we call it, it spreads rapidly through a population like a virus, and once an infection occurs it is devilishly hard to cure. For years now, we’ve seen the world through fear-colored glasses.

Part of this syndrome is a tendency to think violent radical ideologies are all focused on us, in a kind of mass egocentrism. This week the advances of ISIS gave strong evidence to the contrary, as these kooks with a surprising talent for horrific executions advanced in Syria and Iraq. As radical Sunnis, they’re eager to fight less radical Sunnis, Shiites, and any other Muslims or others that care to disagree with them, so they can establish the Caliphate. Do we care what their theological thinking is on this? Hardly. Who doesn’t have more interesting, pressing, and sane things to think about? It’s not our problem, or our world.

Last week there was NY Times reported that ISIS has been attacking the Taliban in Afghanistan. Which is worse? Before you answer, remember, we’ve been fighting the Taliban in Afghanistan since 2001, the longest war in American history. The Times also reported that Syria’s thuggish president Assad, a presumed target of ISIS, was coordinating with ISIS in giving air support for attacks on other rebel groups.

This seemed contrary to all previous reporting, and I wondered if it was pure propaganda (perhaps by another rebel group, or Assad, or ISIS, or – us?). But even if false, it reinforces that we cannot begin to fathom the complexity of the variables in this war, and so cannot reasonably hope to have a positive effect, let alone win it. It is just outside our realm, and our weapons will not resolve it.

Apropos of that, the Atlantic has a good piece by Dominic Tierney on the paradox of American military power: with the most powerful military on earth, we keep getting into military quagmires we cannot win. Tierney notes that we have failed to recognize that almost all modern wars are civil wars, in which our military advantage is less effective than in wars between nation states. And because we still think we cannot be defeated, we cannot admit defeat. The piece is bold, and worth reading.

Gabe normally resists being photographed, but he agreed to let me take a few shots on Saturday at sunset. My favorite was one of him shirtless, looking handsome, but he did not want it published. I’ve also been trying to get a good shot of his golden retriever, Mowgli. He’s an affectionate dog, surprisingly laid back. This is the best pic so far.