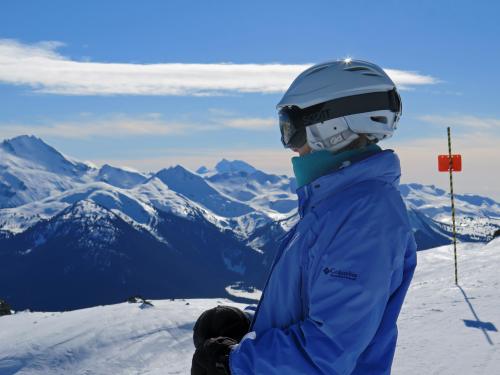 Our ski trip to Whistler was a mixed success. The alpine vistas were out-of-this-world beautiful. The runs were long, and the terrain was varied and challenging. The skies were mostly blue, and the temps were moderately cold. The village was bustling with lots of shops and restaurants, and people speaking many different languages. The free bus system got us around, though we sometimes had to wait a while. We had exciting adventures, good meals, and laughs with family and friends.

The snow, though, was disappointing. We arrived right after two exceptionally good snow years, and in the middle of what’s normally the snowiest time of year, but found it hadn’t snowed for weeks. Bad luck! There was still snow on the upper part of the mountains, but for most of our stay, its texture ranged from fairly hard to super hard. 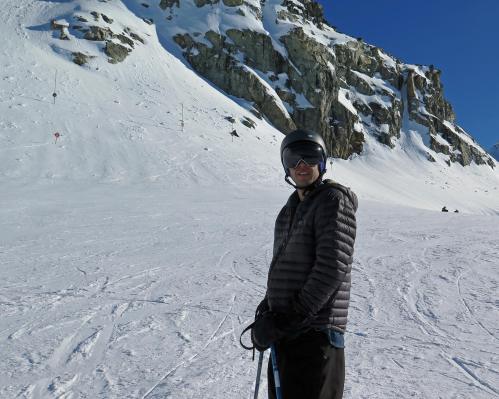 The sound of skis on fairly hard snow is sort of like the sound of an ice scraper on an icey car windshield, or a snowplow scraping a street. We learned to listen for that sound as we went up the lifts and watched skiers descending the steeps, and pondered the least noisy way down. At speed on hard snow, you get bounced and buffeted, and you make those awful scraping sounds. You need to watch out for rocks. It’s hard to relax and let it flow.

But we did find some areas of non-punishing snow, and had a certain share of joyous turns. We particularly enjoyed some areas on Blackcomb mountain that had dramatic rolling ups and downs. There were pitches with non-icey moguls that were fun. And at the top, as I mentioned, spectacular alpine views.

I skied on rented Volkyl Kendos, which I found to be versatile and reliable, stable at speed and quick from edge to edge. I was also happy with my new Dalbello Panterra 100 boots, which were easy to get on and stayed in good communication with my edges.

We had an afternoon in Vancouver before heading home, and checked out the Vancouver Art Gallery, a fine old building in the classical style. There was a exhibition featuring some fine works of Cezanne, Degas, Pissaro, Van Gogh, Modigliani, and Soutine collected by Henry and Rose Pearlman. I enjoyed the paintings, and was particularly glad that Gabe could see this well-chosen collection, while his own artistic eye is developing so quickly.

We also checked out an exhibit of contemporary Chinese art, where I saw two pieces that blew me away: a giant sculpture by Ai Weiwei made of hundreds of antique three-legged stools (shown in this video) and installation involving ceramics by Liu Jianhua that seemed to hover both in space and time. We also stopped in the Coastal Peoples Fine Arts Gallery, which had interesting masks, totem poles, and graceful stone sculptures of bears and other creatures.

On the trip back, I finished reading Your Atomic Self: The Invisible Elements that Connect You to Everything Else in the Universe, by Curt Stager. Its main point is to explain how our bodies are built and operate from an atomic perspective. We all know, sort of, that we’re essentially atoms, but it’s challenging to grasp and accept what that really means. Stager traces our oldest bodily elements back to their origin in exploded stars, and explains how our constituent atoms have been recycled through minerals, vegetables, and animals prior to arriving in us. The idea that we’re connected to everything around us turns out to be true! I found it challenging, and inspiring.