Taking in some art, sport, and food in New York

Last Friday I attended the Software Freedom Law Center’s tenth anniversary conference in New York, wishing my friends at the SFLC happy birthday and learning something about the state of the art in FOSS law. Afterwards I met up with Sally and daughter Jocelyn at the Warwick Hotel for a Manhattan weekend. I had in mind to see some painting, some photography, some opera, and some ballet, all of which we did, plus some good food and conversation and the New York City Marathan.

As for the painting, on Saturday we went to the Metropolitan Museum, where we focused mainly on the exhibit of recently donated Cubist paintings by Picasso, Braque, Leger, and Gris. Cubism has never been my favorite thing, but I was curious to see some reputed masterpieces not shown in public for generations. The exhibit ultimately had its way with me.

I’d known that Braque and Picasso collaborated, but I hadn’t understood that they were basically partners and co-inventors of the Cubist style. What remarkable courage for guys in their mid-twenties to work exclusively in a style that was so radically new and difficult. They must have known it would be tough to sell at a time when, I’m guessing, they needed money. How excited they must have been to be seeing visions no one had ever seen before, and imaging they would permanently change the cultural/visual world. And they were right!

Engaging with art, and particularly art that requires commitment and struggle, changes you at a fundamental level. Your brain rewires itself, neuronal axons and dendrites making new connections. You are a subtly different person afterwards, who sees the world a little differently.

And though it involved some commitment and struggle, I warmed up to the paintings. There is steely rigor, but there’s more than that. There are moods, from sunny to brooding, and a surprisingly amount of humor. But you have to give the paintings some time and let them speak. 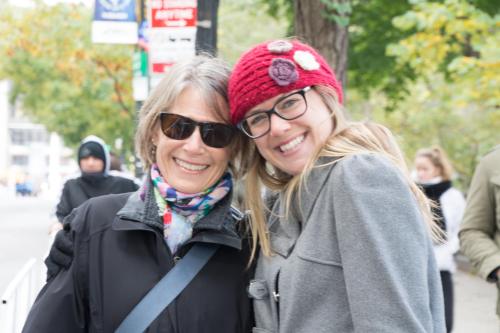 We met Jocelyn for lunch in a Korean place on 37th Street, where our table got covered with savory little vegetarian plates and vegetable dumplings. Our waitress intervened when she realized Sally didn’t know she was supposed to spice up and mix up her kimbap. It was drizzly and chill when we came out and walked up 6th Avenue to the International Museum of Photography.

There we saw an exhibit called Genesis by the Brazilian photographer Sebastiao Salgado. The black-and-white photos are of remote, vulnerable, and magnificent places around the globe, including Antarctica, Galapagos, Patagonia, Indonesia, and Africa. I was very moved by this art. The works were big, some like large posters, and they had lots to say. Some of the landscapes have a stately lyrical classicism, and his photos of indigenous people are frank and intimate. He succeeded in his aim of making me think more about how beautiful and fragile is our planet.

We had dinner at Robert restaurant on the 9th floor of Museum of Arts and Design looking out at Columbus Circle. The room had the energy of forward leaning design, and the food and service were both really good.

Then we walked up to the Metropolitan Opera to see The Death of Klinghoffer. After all the recent controversy (charges of anti-Semitism, which I thought were way off base), I had some worries that there would be protesters, and a tiny worry that there might be a homicidal fanatic ready to attack. But happily there were only normal opera folk. Sally and I both thought John Adams’s music was beautiful and expressive. However, I found the staging static and dull. I’m not sure how much this problem was a matter of direction and how much is inherent to the work. On the whole, I was glad I saw it, but a little disappointed. 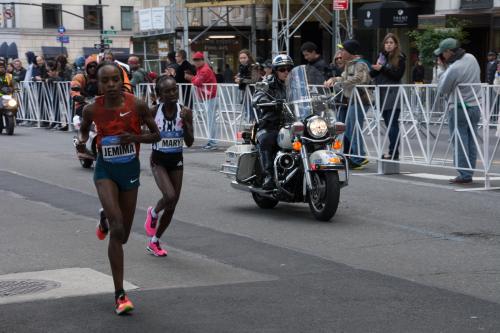 Sunday morning was clear but chilly as we walked up from the Warwick Hotel to Central Park South to a spot about half a mile from the end of the New York City Marathon. We saw the first wheelchair competitors, then the first women, and then the first men. After almost 26 miles, most looked like they were in a hard, painful place. But they were booking! The leaders were preceded by a truck with a sign showing the elapsed time. It was particularly interesting to see how close the fight was for number one and two for both women and men. As they passed us, both pairs were so close that I thought perhaps they were friends that enjoyed running together. The women’s finish was the closest in the history of the race, and the men’s was also quite close. 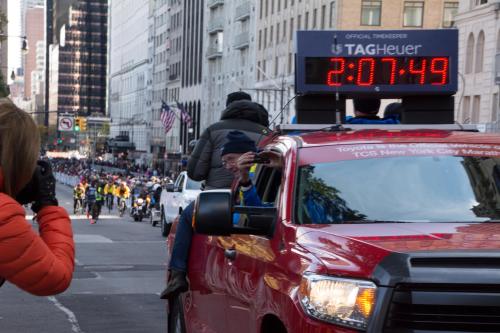 After a quick lunch, Jocelyn came with me to Lincoln Center to a matinee performance of American Ballet Theatre. We saw Sinfonietta (music by Janacek, choreography byJiri Kylian), Bach Partita (Bach, Twyla Tharp), and Gaite Parisienne (Offenbach, Massine). I greatly enjoyed it all, but particularly adored Gaite Parisienne. It was like Nutcracker for grownups: sumptuous, slightly risque fun. Hee Seo was a gorgeous Glove Seller, and Herman Cornejo was a manic, hilarious Peruvian. There were a LOT of really good dancers!

After Jocelyn got on the subway to go home to Brooklyn, I had a little time before we were due to head to the airport. I walked down Fifth Avenue and over to the skating rink at Rockefeller Center. I noted that the varied collection of flags from many nations had at some point been replaced by all US flags. Good looking flags, though .