A rodeo, a tennis match, a run, and a good curry meal 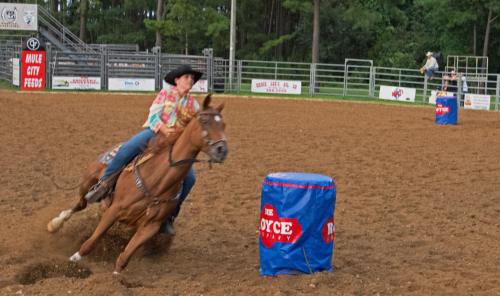 This was an unusually sporty week. I got to see a local rodeo and a semi-local professional tennis event, and took a run down memory lane.

It is always cheering and a little startling to find that there are communities of people who care passionately about something I know hardly anything about. Who knew there was a rodeo community in the Raleigh vicinity? Actually, I had just learned this the prior week from Walter magazine (an attractively designed and informative monthly that covers our area).

The rodeo was in northern Wake County off of Louisburg Road. The main events were barrel racing and bull riding. The barrel racers were all young women, and they rode their horses extremely fast. It reminded me of road course racing – in addition to extreme acceleration, they had to hit the brakes hard at the barrels. I was in awe of their riding skills.

The bull racers sat on bulls and got bucked off. This seems simple in concept, but the trick is not to get killed or severely injured by the bull. We got to see this event up close, and it looked extremely dangerous. I was not happy to think of the bulls being mistreated, but that didn’t prevent my appreciating the courage of the young riders.

On Thursday Sally and I drove east to see some professional tennis at the Winston-Salem Open. We watched Sam Querrey play Guillermo Garcia-Lopez. These guys can play! Querrey had a huge serve which topped out at 137 mph. Garcia-Lopez had a beautiful one-handed backhand that he could hit with a lot of topspin. The match was close through two sets, but Querrey took control and prevailed in the third.

That night we stayed in downtown Winston-Salem at the Brookstown Inn, built as a cotton mill in 1837 and now decorated with antiques and crafts. Our room was spacious (a 20 foot ceiling, at least), and the bed was particularly comfy.

When I’m on the road, I make it a habit to use the hotel gym first thing in the morning. The Brookstown’s web site didn’t mention an exercise facility (it turned out to have a tiny one), so I had packed most of what was needed for a run (forgot my tee-shirt). It was still dark at 6:15 when I went out, shirtless, for a run through the city of my youth.

There was hardly anyone out, so I don’t think I upset anyone with my shirtlessness. There was a pleasant breeze. Heading down Fourth Street, many of the businesses I remember were gone (no more Woolworth’s), but there were some interesting looking restaurants and galleries. I ran past the city’s most striking high rises, including the Reynolds Building (which looks just like a miniature Empire State Building), and along Main Street to Old Salem, the eighteenth-century Moravian town that’s now a tourist attraction. I went past the building where my parents had their bookstore and by the half-timbered brick buildings and grassy squares where I had a happy summer at Governor’s School.

This took about 40 minutes. I hadn’t run more than ten minutes for many a moon, because of various minor injuries. I felt comfortable and strong. The next day, though, my quads were sore.

On Saturday night we walked up to the Packapalooza festival on Hillsborough Street for some people watching and food. The festival was in celebration of the return of the students to N.C. State, and there were plenty of them there. It seems they get younger every year, as I get older. There was real diversity, including in music: some bluegrass, some hip hop, some rock, some Hare Krishna.

I had one moment of shock and horror, when my Nikon D7100 came loose from its strap. I’d gotten an over-the-shoulder strap that screws into the tripod mount, and it somehow got unscrewed. It hit the asphalt hard. Picking it up, I expected to see cracks in the lens and the back screen, but everything looked OK. My test shots seemed fine. The only apparent damage was a minor scratch on the bottom on the housing. It’s a tough little bugger! I got this butterfly at Fletcher Park the next morning. 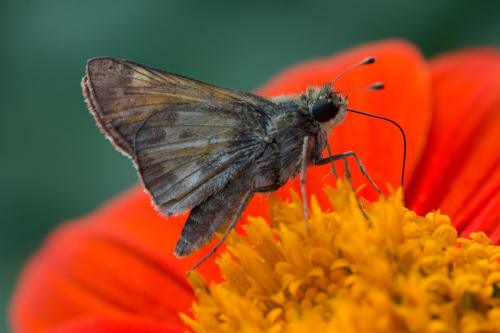 We ate at a new Nepalese/Indian restaurant on Hillsborough Street called Kabab and Curry. The menu had good options for vegetarians, and everything we tried was excellent. We shared veggie pakoras, and I had the vegetarian sampler, called rani thali, which included shahi paneer, alu gobi, chana masala, and dal makhani. The food was spicy in a colorful way, stimulating but not overwhelming, with a variety of textures. A bright addition to the local asian dining scene. I’ll definitely be going back.