The beautiful Bay, and life without Robin Williams 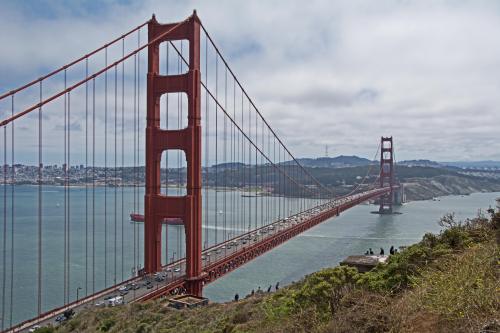 I was privileged to attend the Linux Foundation member counsel’s conference this week in Palo Alto, where I joined several dozen smart lawyers who shared their views on legal issues in the open source space. Before the conference, on Sunday, I had a free afternoon to do some exploring.

I drove my rental VW Jetta (which handled nicely) from San Francisco airport over the Golden Gate Bridge to the Marin Headlands park. I started with the visitor’s center, where I studied a map and formed a plan to drive a circuit with a couple of stops for some hiking and photography.

The road through the brown hills was windy. When I reached the Coastal Road, the view was spectacular. My plan to walk about almost fell apart when I could not find a free parking space, but on the last pass through someone pulled out, and I pulled in. Then I walked back down to Vista Point. 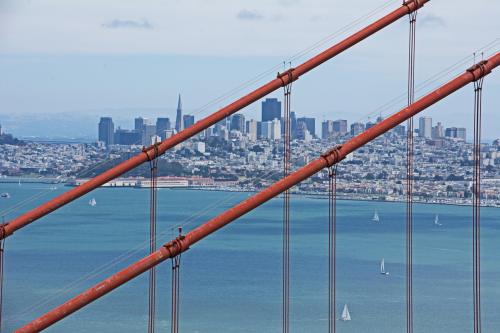 The weather was cool and windy, and the skies were extremely changeable, transforming from overcast to partial sun to dense fog in the space of a few minutes. There were, by moments, amazing views of the bridge, the bay with skimming sailboats, and San Francisco. Some high-spirited young people asked me to take their picture with their Polaroid camera, which I was happy to do.

From Point Bonita I drove down to the town of Sausalito, where there were many bicyclists, yachts, street performers, and a fine view of San Francisco. I walked the main street of upscale shops and restaurants, and treated myself to an ice cream cone.

I’d thought of taking the ferry over to San Francisco, but was unable to find a legal parking space, and also was starting to feel tired. So I decided to drive on down to the hotel in Palo Alto. I’d counted on using my Galaxy smart phone and Google Maps to get directions, but the battery was very low. I put in the backup battery, and it failed to work. I looked for my extra backup battery, and couldn’t find it. My final backup system was the Enterprise rental car map, which did not have a detailed view of how to get through San Francisco. I felt a spike of fierce anxiety. I’ve gotten dependent on Google Maps. But my map reading and directional intuiting skills had not totally atrophied, and I eventually made it.

I learned the next day that Robin Williams had just died not far from where I’d been enjoying the bay and ocean views. I was a big fan of Williams, and felt shocked and sad to hear he’d gone, and even more sad to hear he’d apparently taken his own life. Such a brilliant comic talent.

At dinner that evening, we talked about his better movies, and I realized the works I cared about the most were his stand up comedy specials, which were both transgressive and sweet, full of manic energy and human warmth. I would have hoped that his special gifts gave him joy and satisfaction, and it’s hard to fathom how he could have come to the point of rejecting his own life. But he did. And although I can’t say it makes any sense to me, I think he was entitled to make the choice, and not be second-guessed.