Our diving trip to Fiji 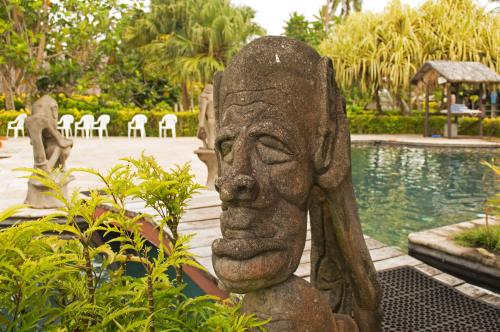 Over the end-of-year holiday Sally and I went to Fiji for some scuba diving. It was a long journey with some rough spots, but also some thrilling spots, and on balance it was worth it. For those who might consider such a trip, here’s some of the nitty gritty on the diving, and also a note about our stop on the way home at the Getty Museum.

I’d always thought of Fiji as one of those “island paradise” places in the Pacific, but in fact didn’t know that much about it. The reason we decided to go was we’d heard the scuba diving was good, and it’s relatively uncomplicated to get to from the US. It is situated north of New Zealand, west of Tonga, and east of Vanuatu. Although it looks like a tiny speck on the world map, it is made up of 332 islands, though most of the population of 860,000 lives on just two of them. The large islands are mountainous and very green

It took us about 26 hours door-to-door to get there. Going out, we had three flights, a long cab ride, a wait, and then an hour boat ride to get to Beqa (pronounced Ben-ga) Lagoon Resort. The staff was on the beach under the palms singing and clapping as we floated up. This was sweet, but we were surprised that there was no dry way to exit the boat. You had to step into the water and then onto the beach, and Sally was still in stockings, but on she went. One of the staff put a little garland with flowers around our neck.

The resort didn’t look quite as gleaming as its website suggested, but it had tropical charm, with palms, flowers, sand, pools, and grass-roofed buildings, and the staff was warm, friendly, and competent. We were in Bure (which I’m guessing means cottage) No. 5, which fronted on the beach and had thick hedges on the side – great privacy. That afternoon, I did a short checkout dive, but otherwise we took it easy and had a couples massage at the spa. It was marvelous.

The next day we did two boat dives in the area. The water was a comfortable 82 degrees, but choppy, and the visibility was mediocre – at most 50 feet, rather than the super clear water we were expecting. We were looking forward to the fabled soft coral, of which we saw some, but we were also struck that there were big coral areas that were bleached white (prematurely dead). It was nice to see many small tropical fish that were new to us, including new species of angelfish, butterflyfish, damselfish, anemone fish, fusiliers, wrasse, parrot fish, and my new favorite, the Moorish idol. 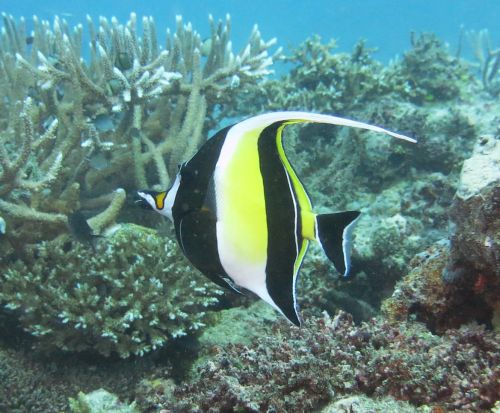 At dinner that evening we sat down next to a youngish Swiss couple, Mark and Doris, who spoke excellent English and were charming and lively. We found a lot of interests in common, starting with diving but extending to skiing, travel, and world affairs. Our conversations that evening and for the rest of our stay were a highlight of the trip. As for the eating, the resort accommodated our request for vegetarian meals, and almost everything was tasty.

On the second day of Beqa diving, we enjoyed talking with Rick, a nice Mormon guy who owned a bunch of car dealerships in the heartland. He was up to speed on the self-driving car, a favorite subject of mine, and like me thinking about what this meant for employment and the economy. He was intrigued to hear about our scuba liveaboard trips, and wanted to learn more. He allowed, though, that he wasn’t sure he was passionate enough about diving to do a week focused entirely on that. I agreed – you’ve got to be passionate.

The next morning we crossed back over Beqa lagoon, and got a ride to our dive boat, the Island Dancer II. It was 101 feet long, 22 feet in the beam, and well-appointed for diving. Our cabin was on the main deck past eating/socializing area. It was air-conditioned and quite commodious and bright by marine standards, with a queen bed, desk, large windows, and private bathroom.

Our crew, led by Captain Joji (pronounced Cho-chee) and divemaster Moses, was all Fijian, friendly and hardworking. Our seven shipmates were from D.C., San Francisco, Sydney, and Moscow, and all were very experienced divers who’d all been to several exotic dive locations before.

Our first night involved a nine-hour trip from Viti Levu (the main island) through the Makogai Channel toward Vanua Levu and Namena Reef. The weather was rainy, and the seas were choppy. The boat rocked enough to dump things off of countertops. Fortunately, our stomachs were up to the challenge (thank, Bonine). The next morning it was calm, and we did a check out dive – ostensibly to check how much weight we needed, but, I suspect, more to let the crew verify that no one was going to be a hazard to himself or others. That went smoothly, and we quickly settled into our routine. 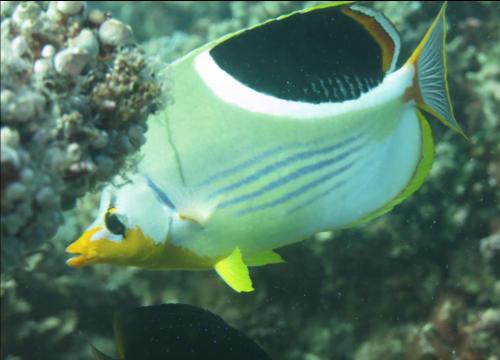 OK, not everything was perfect. The visibility was disappointing. It ranged from a best of about 50 feet down to 20 or so – far from the 80-100 feet we were expecting. The captain said at one point it was as bad as he’d seen it in many years of diving the area. He said a tropical depression shortly before we arrived was responsible. So, that was unlucky. We were also initially struck that there were significant areas of the reefs bleached white with not a lot of animal life. There were fewer big animals (big fish, turtles, rays) than we had hoped. At least one person saw a manta ray, but we did not.

But still, there was a great deal to see. A typical site involved a pinnacle (that is, a column), of coral rising from the sand perhaps 50 feet. The top layer would generally be about 15 feet below the surface, and would have an enormous profusion of soft and hard coral, anemones, and thousands of tropical fish. With so many textures and colors, the coral looked in places like a fantastic garden – amazingly beautiful.

Along with the fish, we saw quite a few other interesting and strange small creatures, including various kinds of nudibranchs, flat worms, sea horses, tiny shrimp, pipe fish, blennies, and others still more obscure. There were a few turtles, and a couple of moray eels. One morning we watched a banded sea snake (highly poisonous) swimming for several minutes, and a very well-disguised octopus, who changed disguises a couple of more times. On one night dive we saw three leaf scorpionfish and a giant clam at least four feet across.

The fourth day in, off of Gau (pronounced Now) Island, we did two shark dives, where we saw dozens of gray reef sharks close up. With them were many red sea bass and smaller fish, as well as schools of barracuda. On the first dive we held in current behind a rock wall, while the sharks came in for fish heads. The second involved a drift dive in a fast current, with the sharks zooming in and out.

On that second dive, I got low on air, and shared Sally’s with her extra second stage as we got pushed hard by the current to the exit point. It was a challenging situation, but we worked well together, as usual. We saw a spotted eagle ray during the safety stop.

On the afternoon of the fourth day, we visited a little village on Gau island called Soma Soma. Our guide there told us that 114 people and 3 clans lived there. The people greeted us in a friendly way. Teenage boys were setting off fireworks with a palm cannon to celebrate the new year, and little kids were splashing in the water. We sampled kava, a watery drink made from soaking kava root. Supposedly it can produce a high, but I got only slight numbness in my mouth. The villagers did some singing and dancing, and got some of us to join in a dance.

My Sea Life underwater camera quit working (wouldn’t turn on) after the second day of diving, and so I rented a little Canon G15 camera from the boat. Lacking a strobe, I used my Sola flash light for extra light, which was suboptimal. My photographic aspirations were simple, really – to get a few images that started to convey the incredible beauty down there – but it was still hard to do.

There were so many great shots that got away. A beautiful angelfish would present itself in all its splendor, and either the camera had gone to sleep, or wouldn’t focus. Or in the half second shutter lag interval, the fish would turn away, or another fish would swim between us, or another diver’s bubbles would mess things up. Then, after the shot, the camera would take a few second to recycle, during which time the subject fish would again look gorgeous, but as soon as the camera was ready to go – so was the fish. Some of those little fish are shy! Anyhow, I tried, and I a few times I got an image I liked. 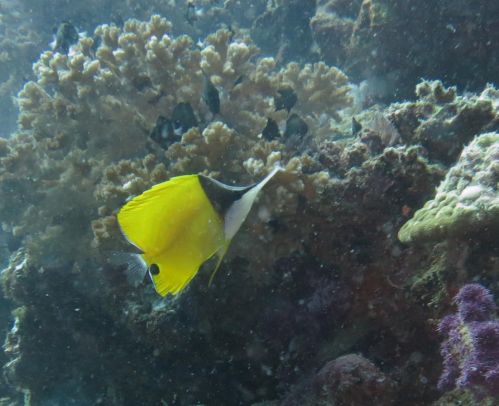 Our trip back was a total of 41 hours, including layovers, but we made good use of the eleven-hour layover in L.A. with our first visit to the Getty Center. The logistics were a bit challenging, in that we couldn’t check our heavy dive bags and so had to cart them by cab and tram to the Getty’s coat check room, but it was worth it.

It is a wonderful museum! It’s perched on top of a hill, surrounded by gardens, with a good view of downtown L.A. It has several connected buildings, with a vibe that’s modern but evocative. The crowd was all ages, international, multiracial, and friendly.

And there was an outstanding collection of European art. We spent time looking at the excellent collection of paintings of Rembrandt and his contemporaries, and of the Impressionists and post-Impressionists. We also very much enjoyed the current exhibit of the works of Abelardo Morrell, a Cuban-American photographer. His works were highly conscious of texture and shape in a formal way, but also touched something emotionally powerful.