Is it 1984, with the NSA as Big Brother, or will Watson come to the rescue? Plus notes on a birthday, an anniversary, a soccer game, and an opera documentary

What to make of the federal government’s massive program for gathering telephone and social media data? My first reaction was fear and horror. Is 1984 finally here? Is the Fourth Amendment a quaint artifact of a bygone era? Of course, we don’t actually know very much about the program, which is still classified. Is it like Big Brother, or more like the airport security services of the TSA, which inconvenience millions and accomplishes little?

As for the TSA, no doubt it’s supposed to make us feel more secure about flying, but for me the predominant emotion is frustration, with additional notes of anger and humiliation when my property and person are touched by uniformed strangers. And we’re afraid that if we complain, we may get put on the do not fly list and subjected to even more frustration and humiliation. Dear NSA analyst, if you’re reading this, I swear I’m not going to cause any mayhem – please please don’t put me on the do not fly list.

I’m kidding, of course (no I’m not – I want to stay off that list). I seriously doubt humans look at more than an infinitesimal fraction of this data, which is sufficiently massive as to defy all hope of human comprehension. It may be that this is why the program continues to exist: it’s become so big and complicated that no one can understand it. The computer doing the heavy lifting has almost certainly surpassed its minders in the complex skills at the core of this program. So who can reasonably make a judgment as to whether it’s a useful or safe project. The computer?

I realize this sounds a bit science fictiony, but if it isn’t already true, it probably will be soon. Remember, IBM’s Watson didn’t just win at Jeopardy, he or it trounced the strongest human players to ever have played the game. The Times reported this morning that the NSA and CIA have been testing Watson for intelligence purposes the last couple of years. He’s already way better at quickly analyzing massive amounts of data than any human ever will be, and he’s likely getting smarter and smarter.

In some ways this is comforting. I greatly doubt that Watson or his peers in artificial intelligence mean us any harm. Good AI is, at least so far, not complicated by the emotions that drive human behavior, including those that make us behave badly. Watson is not greedy, or prejudiced, or power mad. Once he gets this security thing well in hand, maybe he can take on more governmental responsibility. Could this be the way out of partisan gridlock? Watson for president?

Speaking of technological transformations, I recommend an essay in today’s NY Times by Jaron Lanier called Fixing the Digital Economy. Lanier is wrestling with an issue I’ve also written about: what happens to the economy (i.e. us) as human labor is increasingly replaced by robots and AI? He suggests that the source of both increasing decentralization of power and increasing disparities in wealth is computing power, and that the most powerful players are the ones with the most server power. I think he’s wrong to emphasize giant computers as primary sources of wealth, but he’s thrown out some provocative ideas. Here’s one: let’s revamp the economy so that those who take your digital data pay you for it. We could set up market in which Google, Facebook, the NSA and other data miners send out quarterly checks to all of us who provide the data.

Speaking of data and devices, Sally had a birthday this week, and I got her an iPad mini. She was thrilled! I got it at the Apple store at the Crabtree Valley Mall, which as usual was packed, and where I had a completely satisfactory buying experience. My salesman was knowledgeable and funny in a dry way. There are things to dislike about Apple as an organization, but they are really good at customer service. And their devices are designed with emphasis on a pleasant, intuitive human-machine interface, so non-specialists can enjoy them.

We also had our 31st anniversary this week, and celebrated with a fancy dinner at St. Jacques. The restaurant sits in a common strip mall, but inside it manages to convey the joie de vivre of fine French cuisine. I love that they have a special vegetarian menu. It took a little too long to get a visit from the sommelier, but eventually he gave us his full attention. A true and expressive Frenchman, he dissuaded us from getting the chardonnay that we additionally asked about, and with a dramatic explanation of the food flavors and wine flavors at issue persuaded us to try a sauvignon blanc. It worked beautifully. We savored every bite and sip. 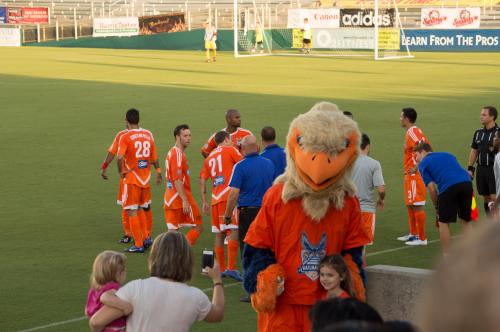 On Saturday night we went out to Cary to see a soccer game – the Carolina Railhawks played the Tampa Bay Rowdies. It was a clear, mild evening. We took along a couple of veggie subs at Jersey Mike’s, because last year we’d learned there wasn’t much in the way of healthful nourishment at the soccer stadium. But we were pleased to see they had improved their beer selection since last year. The field looked green and immaculate. We had good seats near centerfield on row G, and had a pleasant picnic there.

The teams came into the game tied for the lead in the league and seemed well matched. I thought the Railhawks seemed sharper and less thuggish than last year. There were moments of skill and excitement, but no scoring until the 87th minute, when Tampa Bay took advantage of a defensive let down to put in a goal. When time expired there was an additional four minutes. During that time, the Railhawks proceeded to score, and then score again. We won!

One of the Railhawks, Brian Ackley, is an old friend of Jocelyn’s going all the way back to middle school. We’d texted Jocelyn that we were going to the game, who’d texted Brian, and so he was prepared when we hailed him after the game and had a word. He’d played the last part of the game and had almost scored on a header. He’s a fine athlete and warm human being, and it was nice to see him. 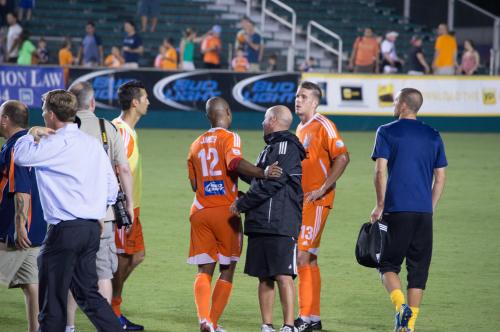 Brian victorious (the Railhawk on the right)

When we got home, we watched a fine short documentary on HBO On Demand about Renee Fleming doing a master class for four aspiring young opera singers. The basic format, as with all master classes, is for a student to perform in front of other students and the master, and then receive criticism from the master. Here the students were all thrilled to have the opportunity to sing for Fleming, who is unquestionably one of our greatest singers. She was warm, generous, and a great listener. She gave some very specific advice on producing good vocal sounds, and spoke frankly about things like pre-concert nervousness. She gives a window into how difficult it is to be a great singer, but at the same time how wonderful.