A piano tuning and a ballet board meeting 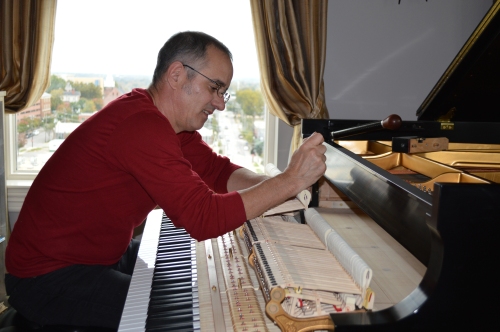 My Steinway grand piano (an A) is a gorgeous musical instrument, but it is subject to entropy. It needs a regular tuning, and lately a few notes in the lower-middle range sounded overly bright to me.

On Saturday, Phil Romano, a master Steinway technician, tuned it and did some voicing by needling the hammers. Phil was about to take off on another tour with Paul McCartney, and shared some interesting stories of Sir Paul’s performing in the Queen’s Jubilee, the Olympics, and South America.

With the benefit of Phil’s good tuning and voicing, I had a gratifying session with my instrument on Saturday. Recently I’ve felt a bit stuck on the same musical plateau. Although this has happened from time to time over the years, each time it’s uncomfortable, as I wonder whether I’ve gone as far as I can go. An essential part of the joy and challenge of the classical tradition, for me, is forward movement. It’s true that I’m now playing better than I ever imagined I would, but still, I would see no point to practicing if I didn’t expect to achieve greater technical and artistic mastery. This is one of the reasons it is so important to have a teacher — to get you unstuck when you’re stuck.

Anyhow, today felt as if I was getting unstuck. For a devoted student of the piano, there are few things more pleasurable than a freshly tuned Steinway. I played some of my favorite Chopin, Debussy, and Liszt works, and made some headway on my assignments from Olga — Rachmaninoff’s Elegy and Chopin’s etude op. 25 no. 12. Also, for a special treat, I read through some of Tchaikovsky’s Nutcracker. The Waltz of the Flowers really works as a piano piece! I’d like to polish it up for the holidays if I can find the time.

Speaking of the Nutcracker, this week I had my first meeting as a new member of the board of directors of the Carolina Ballet. I’m really pleased to be able to help support this wonderful company. It’s also good to meet other people who really love ballet. As Ricky Weiss pointed out at the meeting, not everyone likes it, and some actively dislike it, but those who care about it care a lot.

In his report, he noted that we have a particularly strong group of dancers now. In the all Balanchine program, he had four different Apollo’s. It is, he said, an extraordinary thing, particularly in a company of this size, to have four males who are all capable of fully expressing this difficult role. (In an interesting coincidence, this morning the dance critic of the New York Times discussed Balanchine’s Stravinsky ballets and led off the discussion with Apollo.)

There are lots of things to be happy about, including the company’s large number of performances, the large number of new works, and the consistently high standard of performance. Weiss noted that the current group of dancers have achieved a high level of individuality, by which I think he meant they are artists who express not only the classical tradition but also themselves.

At the same time, there is a real concern about company finances. This is no great surprise. Since the recession of 2008, times have been hard for lots of people, including lots of arts organizations. But realizing this does not lessen the difficulty for this particular organization. I continue to think that there are more people around here who would enjoy ballet who haven’t yet discovered it, including some who would find it rewarding to help support the company. I hope so.

One Comment to “A piano tuning and a ballet board meeting”