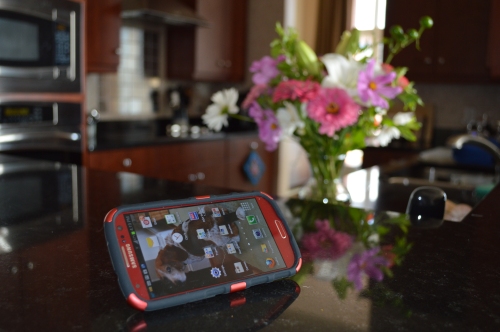 This week I got my new Android smartphone upfitted with my email accounts and a variety of apps. I’d been reluctant to give up my old smartphone partly because of the investment, both in money and effort, of apps, but on reflection I realized that a good many of the apps I’d previously downloaded were seldom or never used. The move to the Galaxy was sort of like moving to a new apartment — a good opportunity for some app house cleaning.

I easily and with little expense replaced those things that were useful, like internet searching, weather reports, navigation, travel support, news, and music. I got my most used apps organized in folders that I could quickly get to. I installed personalized wallpaper (our dog Stuart). Everything seems to work fine, with the exception of the voice activated search feature, which is not ready for prime time.

Through clumsiness, I dropped the device a couple of times in the first few days, fortunately without causing damage. This provided some proof of its durability and toughness, but also served as a reminder that devices are not immortal. I ordered a Seido case for protection, which fits well and looks good. It has a neat little kickstand on the back.

I’ve been reading The Lights in the Tunnel: Automation, Accelerating Technology and the Economy of the Future, by Martin Ford. Like Brynjolfsson and McAfee, Ford starts with the premise that technology is developing at an ever-accelerating rate, and examines the economic implications of that development. As our machines get smarter and smarter, they will replace people in more and more jobs. At some point, the kinds of jobs that most people do will be taken over by the machines. Those people who’ve become redundant will not be able to earn an income, and so will not be able to buy goods and services, and their numbers will continue to grow. Producers of goods and services will eventually have no markets. Then the economy collapses. Q.E.D.

Ford thinks there is a possibility of avoiding economic meltdown, but he thinks that will require dramatic shifts in the economic order. To continue production, we’ll have to find a way to sustain consumption. Ford’s solution involves taxation of producers to redistribute wealth to consumers. He suggests that we think about a system where supplemental incomes is distributed to sustain the cycle of production and consumption. In this vision, the individual’s primary contribution is as a consumer, rather than a producer. Production is done by the machines.

I came upon a lengthy essay by Marshall Brain on this same subject titled Robotic Nation, which is well worth reading. Like Ford, Brain accepts the premise that Moore’s law and its corollaries are leading inexorably towards computers so powerful that they will render a great many human workers redundant. To address the problem of economic meltdown, Brain has proposed a concrete solution: the government pays $25,000 to every citizen. He sets out a variety of ways this could be financed, from selling advertising to a smorgasbord of taxes.

Assuming Brain and Ford are correct and we manage to avoid economic collapse, the question I keep coming back to is what are humans going to do once they’re obsolete as economic producers? How are they going to find meaning and joy?

I’d like to think that when robots have taken over most of the world’s work, people who get Brain’s $25,000 payments would devote themselves to communities and caring for others, exploring the mysteries of the physical universe with science, creating aesthetic wonder with the fine arts, expressing their physical energy in competition and travel, appreciating the delights of the world of the senses, and otherwise expanding and expressing their creative powers. But I have some concern that they might just watch more TV and eat more junk food. Think of WALL-E, the touching and intelligent animated Pixar movie about the eponymous robot, and the degenerate blobby humans in his world.

To avoid massive blobbiness, we’ll need to revise and expand our value systems. Fortunately, that’s something that we can get started on without a major political reform or expenditure of funds. Even if the robot-driven future never arrives, it would be a worthwhile project, since there’s a certain amount of blobbiness already.

The place where I’d begin is with a deeper understanding of how our brains function, how human communities function, and how our systems of values and morality currently work. There’s a lot of exciting cross-disciplinary work being done, and I’ve written about some of it in the last few months (including on books by Jonathan Haidt,Michael Gazzaniga, Daniel Kahneman and E.O Wilson). I’m on the lookout for more.