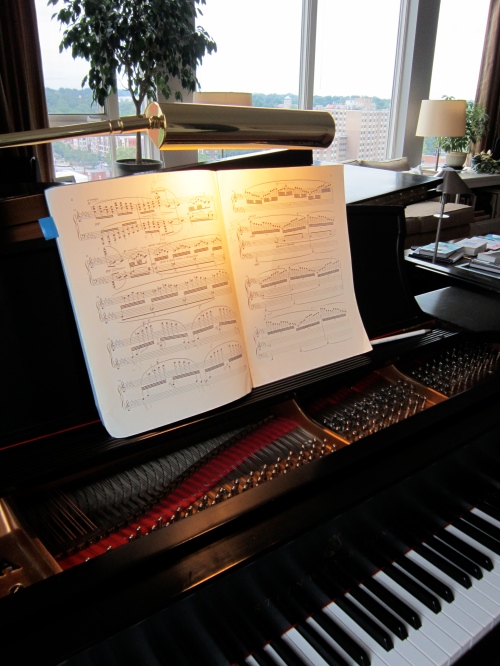 How nice it is to have a cocktail and relax at home on Friday evening! Of course, strong drink must be handled with care. A glass of wine with dinner is certainly a pleasure, but the habit can sneak up on you, and a glass of wine can so easily turn into three.

A few weeks back, Sally and I decided to limit drinking to weekends. Among other good effects, this makes the Friday evening drink particularly delightful. Last night, Sally made us margaritas with fresh lime. For the first time in years, I had a sudden urge to listen to Stevie Wonder hits from the seventies, which we now can easily stream from Rhapsody. I dedicated my streaming of the wonderful Signed, Sealed, Delivered to my sweet Sally.

We watched a documentary called Bill Cunningham New York. Cunningham is a photographer whose specialty is candid shots of New Yorkers wearing interesting clothes. He has a feature in the Sunday NY Times style section in which he shows this week’s street fashion trend, which, although I’m far from a fashion person, I always enjoy looking at. But I didn’t know him by name, and would have missed the documentary but for Sally’s putting it at the top of the Netflix queue.

It was sweet and kind of inspiring. Cunningham is in his mid-80s. He’s still snapping pictures all the time (using 35 mm film), publishing weekly in the Times, and travelling by bicycle on the streets of Manhattan. Age may have slowed him down a bit, but he’s still passionately creative. He’s got a great, boyish smile.

We voted in the North Carolina primary this week, which involved primary races for governor, secretary of agriculture, and various other offices, and an amendment to the state constitution to ban gay marriage. Why a gay marriage ban? It’s mysterious, and bizarre. I am stunned that it passed by a 20-point margin. Raleigh, the part of North Carolina in which I spend most days is multi-cultural and tolerant, with a visible and completely uncontroversial gay population. (I blogged about this visibility a while ago.) But most of the state is rural. What is going on in the heads of homophobes? I’d like to understand, but I don’t get it. It’s a different culture. I believe that that culture is eventually going to change, but for now it’s still alive and kicking.

Speaking of culture, I’ve been reading The Social Animal, by David Brooks, the NY Times conservative columnist. Brooks has collected recent ideas on psychology and culture, including those of Daniel Kahneman and Jonathan Haidt, and woven them into a readable and, in places, intriguing book. The theme, which is getting considerable attention lately, is that people are primarily driven by unconscious perceptions and desires, rather than rational thought.

But Brooks views this in a positive light, arguing that although our brains make all kinds of mistakes, they work better than a completely rational system running in real time could. He argues that behavior is best viewed as a function of those around us and our surrounding environments rather than of individual intelligence, and proposes that we think about meaning more in terms of relationships and cultural systems. I don’t much like his device of two imaginary characters who gradually discover or rub up against the various theories he explores; the characters never really come to life. But I think it’s worthwhile — I’m more than half way through, and likely to finish.

On Saturday I had my last piano lesson of the season with Olga Kleiankana, who’s headed to Moldova for the summer. We talked about some Rachmaninoff and Scriabin pieces for me to work on over the summer, and then worked on Scriabin’s second prelude (op. 11). Olga admitted that it sounded significantly better, but pointed out places where the tone seemed flat. She continued to emphasize the importance of gesture in sound production and expression, and when pedaling problems emerged she taught me how to test out pedaling improvements.

Then I played Debussy’s Second Arabesque for her for the first time. She pointed out that I seemed to be reading note by note, when many of the elements were repeated with slight variations. As she went through a quick score analysis, I had a eureka moment: score analysis was not designed to torture hapless students, but rather to make it possible to understand and learn music more quickly and effectively.

Finally I played Debussy’s Reflets dans l’eau, from Images, premiere serie. This is a gorgeous impressionist piece that calls to mind (especially after hearing the title) reflections in water. It has dazzling effects, some of which are difficult. Olga noticed that I got tense in my shoulders in the fast 32nd-note passages, and advised me that that could be fixed by breaking the passages into simple parts for practice. We also talked about the relationship of touch and tone color. At one point, I played a simple chord, and she said, with a pained expression, “Don’t just play the notes! You need to always think before you touch the keys!”

And she was serious. She listens with a level of concentration that’s almost scary, and expects me to at least try to do the same. I’m having occasional glimmerings of what this might be like. The sound seems richer, with more depth and detail. It’s like hearing in 3D. Of course, little flaws, like unbalanced chords or inappropriate accents, are more jarring. But when a musical statement works, it touches more deeply.