Our Austrian adventure, including some good ski tips

Last week we had a skiing adventure in the Arlberg region of Austria. This was our first ski experience in the European Alps, after quite a few trips to the U.S. and Canadian West. We were curious to experience the birthplace of alpine skiing and taste a different culture. It exceeded our expectations. If you love skiing, you should go.

We arrived in Lech on Sunday afternoon to find it had snowed a lot the previous day, but the snow had just changed to rain. As we got our bearings and rented equipment, hiking the roads with slush on top of ice, we managed not to fall, but our feet got wetter and wetter. We made a note to bring some water proof boots for the next trip. But some good news: with the weak Euro, the prices for lift tickets, equipment rentals, and hotels was substantially cheaper than out West.

The next morning it cleared up, and we took our first runs at Lech (“leck,” more or less). It was beautiful. There are spots in the Rockies that rival it for magnificence, but here the craggy peaks were everywhere, towering above us and extending on and on. The slopes weren’t cut out of the mountain forest, as in the Rockies, but rather marked with posts on the mountain as nature made it. Snow coverage was good, though the snow was a bit heavy. We quickly adjusted and had many good runs on several different slopes. 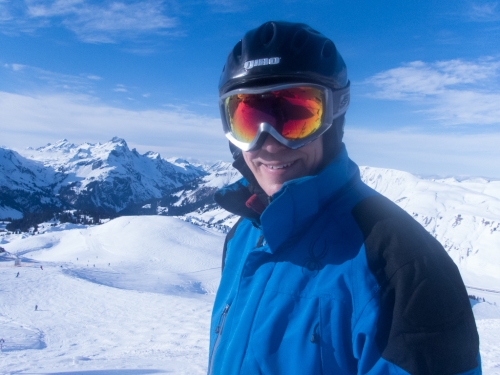 Early on we figured out that the official ski map gives only the most general idea of the lifts and slopes. The total Arlberg ski area is huge, with 97 lifts, and we discovered that the large maps near certain lifts were essential for navigation. There seemed to be an assumption that everyone could read a map and exercise good sense; we saw no greeters or patrollers looking to help the confused. But the slopes and lifts had a kind of logic, and almost without fail we ended up where we were aiming.

The lifts were mostly modern, high-speed, highly automated, high-capacity marvels. They had little gates, like at horse races, that let skiers onto conveyor belts, which generally deposited the skiers in the ideal spot to get gently swept onto the seat. Many of the lifts had a plastic bubble that could be lowered to protect against wind and snow, and some of the seats were heated. There were some exceptions, ranging from old school T-bars to enclosed gondolas. But over all the system was amazing. And unlike in our experience in the U.S., the lifts almost never stopped. Most of our time there, we had no lift lines, and many times had 4 or 6 chair lifts to ourselves. 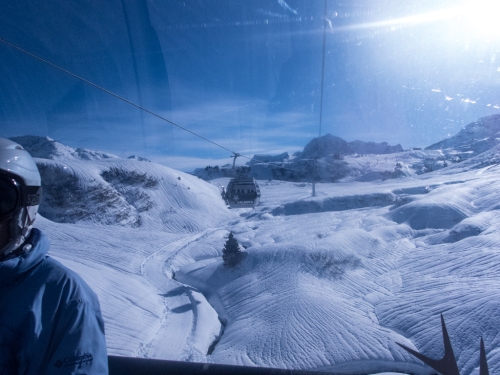 My rented skis were Atomic Vantage 90s, with wide rocker tips, some center camber, and 90 cms under foot. I found them not too stiff and not too loose — a Goldilocks all mountain ski. They performed well in both hard and soft snow, though I did not really figure out how to work them in very deep powder. I brought my own Dalbello boots, which performed well, though I got a blister on my left shin (driving those shins forward!) and a very bruised left ankle bone.

We stayed in Hotel Knappaboda, a 22-room family-run hotel that felt cozy and friendly, like the ideal bed-and-breakfast. The manager/owner, Gertrude Walch, also served as our concierge, recommending a new restaurant each night, securing reservations, and giving directions. It was not quite, as advertised, ski-in ski-out — the lift was about an 8-minute walk — but no matter. Our room had all the modern conveniences, including free and fast wi-fi, and was pretty and comfortable. It was also quiet. Especially after it started snowing again, at night we heard nothing from the street, nothing from neighbors, and practically nothing from the building itself. So peaceful! 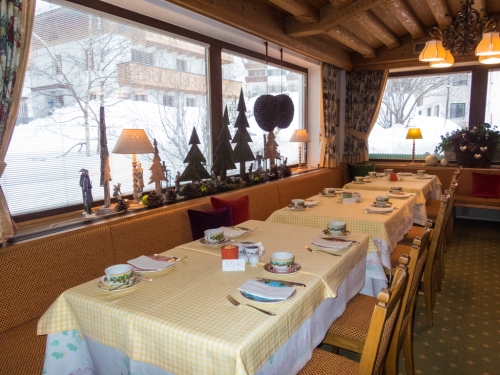 Ready for breakfast at the Knappaboda

We hired a teacher-guide for Wednesday, when it started to snow again (and continued to snow until mid-Friday). Our ski guru was Walter Goggelmann. He turned out to be quite an accomplished person: a 20-year professional instructor who also worked in the off-season as a critic for a Berlin magazine, who spoke German, English, French, Spanish, Russian, Dutch, some Italian, and some Turkish. He also was an experienced scuba diver with good knowledge of Indonesia.

Walter watched us ski briefly, and identified three things we needed to work on. 1. Press into the snow with the downhill big toe. 2. Turn the uphill knee out. 3. Turn the head 45 degrees toward the next turn. The toe trick works to get your weight forward and the front edge better engaged. You should try it! We also learned that on the flats, you go faster if you press down with all ten toes. After a few hundred more turns, our skiing was both stronger and more relaxed.

Walter took us on der Weisse Ring, a signature tour route which started at Lech and ended a couple of hours later with a very long run at Zurs. Walter stopped at one point at did a bit of yodeling where there was a long echo. At the end of the day, Walter suggested we check with him the next day, since he suspected his afternoon client might cancel, and he’d enjoy skiing with us at no charge. It was a nice compliment — hey, we must be pretty good! — though in the end he couldn’t make it.

We also skied two days at St. Anton. It was gorgeous there on Tuesday, and though the snow was hard (not quite ice) in the morning, we liked the steep long runs. When we returned on Friday, it was snowing hard, and visibility was very limited — we really couldn’t see the snow underneath us, and could barely see the next piste markers. With no beautiful views to distract us, we concentrated on polishing our technique. At midday we went over to the Steuben area for lunch. The lifts there were old-school, slow fellows, but the visibility got better, and the snow was good.

I felt a certain reverence for Arlberg, like a golfer might for St. Andrews. The people looked a lot like us, but there was a different culture, which we enjoyed observing. There was a certain formality, and less extrovertedness — not much apparent interest in engaging strangers. There was a certain pushiness in the few lift lines we had. At the same time, people laughed a lot, and quickly responded when a skier fell or had problems. People seemed to particularly love little kids.

The restaurants we tried all had carved wooden ceilings, interesting fabrics, figurines, and a dramatic crucifix in one corner. We’d worried a bit about finding vegetarian food, but this generally worked out fine, though with more pasta and other carbs than I’d want to eat all the time. Our favorites were the Kroner and the Omesberg.

People speak German. I note this, because, before we went, several people said to me, well, everyone speaks English. Not exactly. Of those in the hospitality business, most speak some English, but there’s a wide range of skill levels. We could have gotten along with English only, but I was glad to have a little very basic German. We enjoyed being surrounded by the language, which made it very clear we were somewhere different.

One thing that was the same: pop music. At the apres skis bars, we heard almost all U.S. rock from various eras, and in the restaurants there was classic jazz. Since we seldom listen to this music at home, this was a change for us. We also noted that fewer Austrians are overweight. Unfortunately, more people smoke.

I had only one real fall all week. On Thursday near Warth, after perhaps two feet of new snow had fallen, and with visibility still quite limited, I felt moved to test the deep powder. A few turns later I went down, and my face ended up under the snow. Nothing was hurt, but getting out was a problem. At first I tried hiking, but this was not possible, since the snow was almost up to my waist. Eventually I used a ski to pound the snow into a little platform that would hold the skis while I got remounted.

Anyhow, we got a taste of the culture, and a taste of the skiing — enough to want to come back. Early Saturday morning, we sadly bid Gertrude auf wiedersehn (she waved as our taxi pulled off), and took the bus to the Zürich airport. From there we took the train to the main station in Zürich and explored the winding cobblestone streets of the old part of the city. 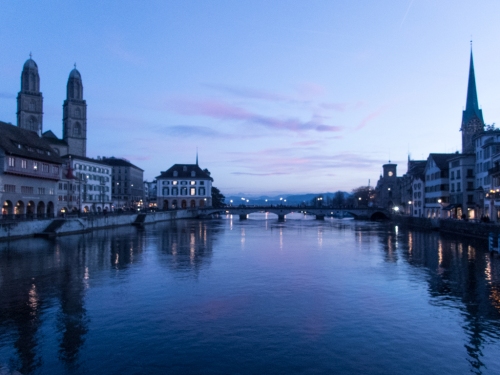 Zürich was quite charming. The high point for us was the Kunsthaus art museum, which has an excellent Impressionist and Post Impressionist collection, as well as some interesting old masters and current exhibits. We walked along Bahnhofstrasse and went into the Teuscher chocolate store, and after some looking, purchased their smallest box of truffles (two for each). We sat by the river and had cappacinos, and watched the gulls, ducks, and swans. Then we had a look at the famous Marc Chagall stained glass in Fraumunster church. After more strolling, we ate at a nice Mediterranean restaurant called Mere Catharine.