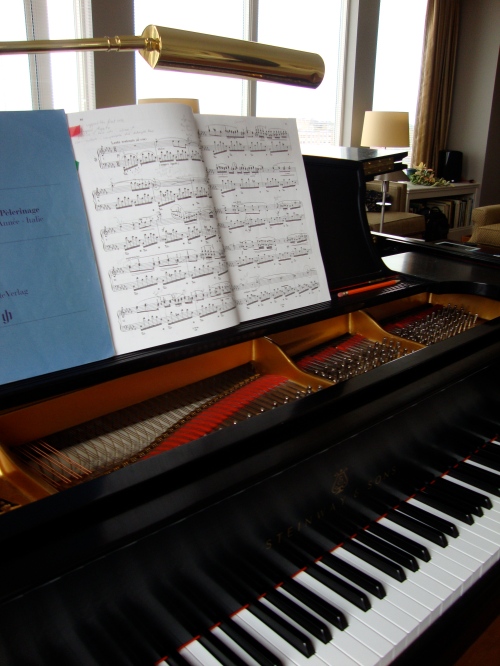 It was another busy week of many meetings, calls, and issues, with business dinners almost every night, and my email backlog continuing to pile up. But interesting, always interesting. On Friday I was scheduled to go to the coast for two days of wreck diving, but bad weather arrived and the trip was cancelled. I was not heartbroken. It was good to get some down time.

On Saturday morning it was cold and rainy. I thought of taking Yvonne’s open level Vinyasa yoga class at Blue Lotus, but learned from the web site that someone else was filling in for her. I check for alternatives, and found an early Pilates class at the Y. And so it was that I had my first Pilates experience. It was similar to yoga, with its emphasis on breathing throughout a series of exercises with unusual stretches and contractions. I found this particular class less strenuous than my normal yoga classes, and also less serenity-inducing. Still, I would do it again, especially if there’s no yoga available.

Other new things: earlier in the week I read a news story about Biophilia, the new multimedia production of Bjork, the Icelandic singer-songwriter, and downloaded the work to my iPad. Biophilia is in part a collection of songs about nature and science, but rather than being an album, it’s something we don’t have a word for yet. Bjork worked with scientists and artists to make interactive productions that allowed the listener to participate actively in the music by adding notes and altering images. After a few minutes of experimenting, I could make a bit of music with the tools provided, and participate in some of Bjork’s visions of microscopic, geologic, and celestial phenomena.

The idea of sharing a vision this way — not just providing passive entertainment, but inviting participation as a way of inspiring and teaching — is exciting, and the NY Times story took the view that it was ground breaking. For me, the experience was intriguing but not really thrilling. I liked being allowed to work with Bjork’s electronic instruments and play with her, but the musical possibilities were narrowly circumscribed and not expressive enough to satisfy me.

For example, by using the touch screen, in various songs you can add to Bjork’s fairly simple musical backdrop more harp notes or more synth notes, and play faster or slower, but so far as I could figure out without taking any new harmonic direction. The videos were in some cases beautiful, but the songs themselves were more performance art than either art music or dance music. Still, I liked the ideas, and I will probably play some more with Biophilia. 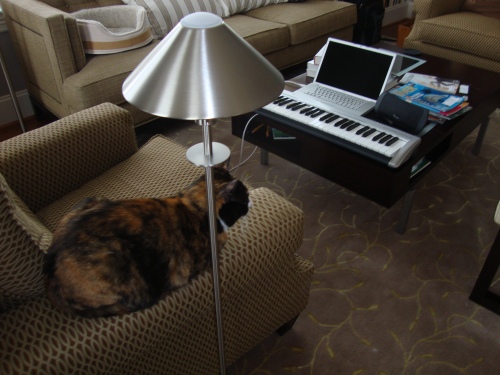 The idea of using technology to express new musical thoughts has interested me for a while. This past spring, I began playing with the instruments built into GarageBand (a Mac application), and eventually purchased a cheap electronic keyboard and a cheap auxiliary speaker to experiment with. One of my ideas was to translate early music (1500s) through synthesizer voices to see what new things emerged. The sheet music came with a lot of interpretive problems, so I didn’t get far on the vector. But I had fun improvising with various synthesizer personalities using various systems, like Greek modes and pentatonic scales. I thought of it as playing, in the sense of playing a game. It’s a different kind of musical outlet.

Bjork’s idea of engineering a collaboration with an unknown audience has a distinguished heritage. It’s what we do when we open a volume of Chopin nocturnes and start to play. Chopin left us the architectural drawings, which the pianist uses to create musical in real time, while at the same time personalizing the structure with thousands of unwritten details according to the pianist’s experience, intelligence, and feelings.

This system — master composer, written music, trained pianist — has worked amazingly well for a couple of hundred years. It does, however, depend on musical education — there has to be a support system for training pianists, and also listeners. For music with the harmonic complexity of the great Western tradition, you have to learn a lot before you can interpret it, and you have to learn a fair bit to get deep enjoyment from listening to it. It is worth the effort.

I sometimes worry that there is a long historic curve in which our music devolves from the complex and brilliant to the simple and sweet, and from there to the just plain dumb. The traditional system of classical music education and performance is not in good health. But perhaps humans are just getting started in discovering what music can do. Who knows where it goes? We have to keep experimenting, keep creating. That’s what Bjork is doing, and good for her.